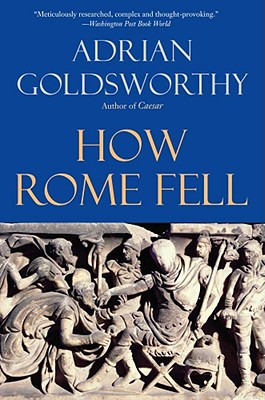 A major new history of the fall of the Roman Empire, by the prizewinning author of Caesar

In AD 200, the Roman Empire seemed unassailable, its vast territory accounting for most of the known world. By the end of the fifth century, Roman rule had vanished in western Europe and much of northern Africa, and only a shrunken Eastern Empire remained. In his account of the fall of the Roman Empire, prizewinning author Adrian Goldsworthy examines the painful centuries of the superpower's decline. Bringing history to life through the stories of the men, women, heroes, and villains involved, the author uncovers surprising lessons about the rise and fall of great nations.

This was a period of remarkable personalities, from the philosopher-emperor Marcus Aurelius to emperors like Diocletian, who portrayed themselves as tough, even brutal, soldiers. It was a time of revolutionary ideas, especially in religion, as Christianity went from persecuted sect to the religion of state and emperors. Goldsworthy pays particular attention to the willingness of Roman soldiers to fight and kill each other. Ultimately, this is the story of how an empire without a serious rival rotted from within, its rulers and institutions putting short-term ambition and personal survival over the wider good of the state.