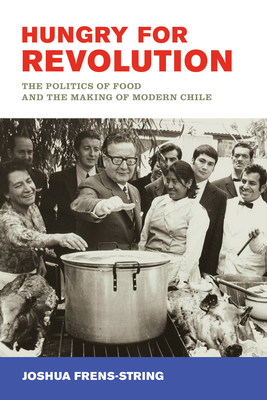 Hungry for Revolution: The Politics of Food and the Making of Modern Chile

Hungry for Revolution tells the story of how struggles over food fueled the rise and fall of Chile's Popular Unity coalition and one of Latin America's most expansive social welfare states. Reconstructing ties between workers, consumers, scientists, and the state, historian Joshua Frens-String explores how Chileans across generations sought to center food security as a right of citizenship. In doing so, he deftly untangles the relationship between two of twentieth-century Chile's most significant political and economic processes: the fight of an emergent urban working class to gain reliable access to nutrient-rich foodstuffs and the state's efforts to modernize its underproducing agricultural countryside.
Hungry for Revolution: The Politics of Food and the Making of Modern Chile

I am a historian of modern Latin America. I received my Ph.D. in History from New York University in 2015. My first book Hungry for Revolution: The Politics of Food and the Making of Modern Chile (University of California Press, 2021) explores the role of food politics and policy in the rise and fall of Chile's Popular Unity (UP) revolution.

Prior to joining the faculty at UT, I was a Postdoctoral Teaching Fellow in NYU's Core Curriculum program and an editor of the NACLA Report on the Americas, one of the most widely-read English-language quarterlies on Latin America and its relationship with the United States. I have also served as managing editor of the Radical History Review and as a researcher with the Open Society Institute's Latin America Program.