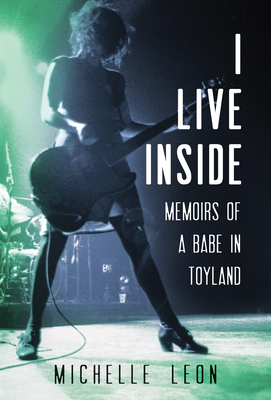 I Live Inside: Memoirs of a Babe in Toyland

Babes in Toyland burst onto the Minneapolis music scene in the late 1980s and quickly established itself at the forefront of punk/alternative rock. The all-female trio featured a shy, seventeen-year-old Jewish teen from the suburbs on bass guitar--an instrument she had never played before joining the band.

Over the next few years, Michelle Leon lived the rock-and-roll lifestyle--playing live concerts, recording in studios, touring across the United States and Europe, and spending endless hours in stuffy vans, staying in two-star motels, and sleeping on strangers' couches in town after town. The grind and drama of life in the band gradually wore on Leon, however, and a heartbreaking tragedy led her to rethink her commitment to the band and the music scene.

Leon's sensitive, sensory prose puts readers right on stage with Babes in Toyland while also conveying the uncertainty, vulnerability, and courage needed by a girl who never felt like she fit in to somehow find her place in the world.
I Live Inside: Memoirs of a Babe in Toyland

Michelle Leon is a freelance writer, musician, and teacher. She was the bass player for the influential punk band Babes in Toyland from 1987 to 1992 and again in 1997. Her writing has appeared in City Pages, the music essay compilation The First Time I Heard David Bowie, Saint Paul Almanac, VitaMN, Haute Dish, and Your Flesh magazine. Michelle holds an MFA in Creative Writing from Goddard College. She lives on the east side of St. Paul with her husband, two children, and three dogs.