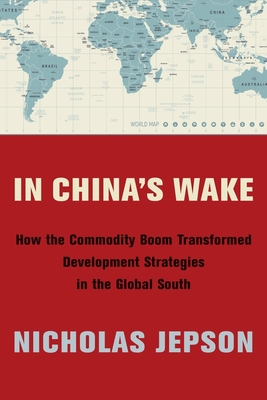 In China's Wake: How the Commodity Boom Transformed Development Strategies in the Global South

In the early 2000s, Chinese demand for imported commodities ballooned as the country continued its breakneck economic growth. Simultaneously, global markets in metals and fuels experienced a boom of unprecedented extent and duration. Meanwhile, resource-rich states in the Global South from Argentina to Angola began to advance a range of new development strategies, breaking away from the economic orthodoxies to which they had long appeared tied.

In China's Wake reveals the surprising connections among these three phenomena. Nicholas Jepson shows how Chinese demand not only transformed commodity markets but also provided resource-rich states with the financial leeway to set their own policy agendas, insulated from the constraints and pressures of capital markets and multilateral creditors such as the International Monetary Fund. He combines analysis of China-led structural change with fine-grained detail on how the boom played out across fifteen different resource-rich countries. Jepson identifies five types of response to boom conditions among resource exporters, each one corresponding to a particular pattern of domestic social and political dynamics. Three of these represent fundamental breaks with dominant liberal orthodoxy--and would have been infeasible without spiraling Chinese demand. Jepson also examines the end of the boom and its consequences, as well as the possible implications of future China-driven upheavals. Combining a novel theoretical approach with detailed empirical analysis at national and global scales, In China's Wake is an important contribution to global political economy and international development studies.

In China's Wake: How the Commodity Boom Transformed Development Strategies in the Global South

I joined GDI in 2016 as a lecturer in globalization and political economy before taking up my current fellowship in 2019. I previously taught at the universities of Leeds and Bristol.

I study the political-economic implications of the rise of China for the rest of the world.

My current project focuses on China's growing role as a financier of development projects across the world via the Belt and Road Initiative. I look at what happens when governments struggle to repay their debts to China- and how China's emergence as a major creditor is changing and challenging systems of global financial governance. I will be starting a Leverhulme ECR fellowship in late 2020 which will continue to explore these areas.

I am interested in global-historical theories of capitalism and how these can help us understand contemporary processes of development at both national and global scales. I also have an interest in comparative/historical methods (including Qualitative Comparative Analysis).

I am leader of the Working Group on Financial Investments, Services and Speculation for CHERN (China in Europe Research Network), funded by the EU's Cooperation in Science and Technology Association (COST).

I have fieldwork experience in Ecuador, Zambia, Jamaica and South Africa and have been a visiting scholar at the universities of California at Santa Barbara and Wisconsin-Madison. In addition to the UK (Warwick, Bristol) I studied in Germany (Freiburg), India (JNU), South Africa (UKZN) and Argentina (UBA).