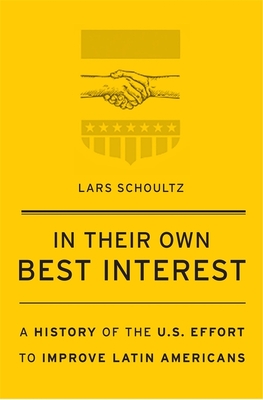 In Their Own Best Interest: A History of the U.S. Effort to Improve Latin Americans

For over a century, the United States has sought to improve the behavior of the peoples of Latin America. Perceiving their neighbors to the south as underdeveloped and unable to govern themselves, U.S. policy makers have promoted everything from representative democracy and economic development to oral hygiene. But is improvement a progressive impulse to help others, or realpolitik in pursuit of a superpower's interests?

In this subtle and searing critique of U.S. efforts to 'uplift' Latin America, Lars Schoultz challenges us to question the fundamental tenets of the development industry that became entrenched in the U.S. foreign policy bureaucracy over the last century.
--Piero Gleijeses, author of Visions of Freedom

In this masterful work, Lars Schoultz provides a companion and follow-up to his classic Beneath the United States...A necessary and rewarding read for scholars and students of U.S. foreign policy and inter-American relations.
--Renata Keller, The Americas

In Their Own Best Interest: A History of the U.S. Effort to Improve Latin Americans

He has been a MacArthur Fellow in International Peace and Security and held residential fellowships at the Woodrow Wilson International Center for Scholars and at the National Humanities Center. Schoultz is the recipient of the Tanner Award (1982), the Class of 1994 Award (1994), and the William Friday Award(2006), all for teaching excellence, and he is a member of the Order of the Golden Fleece and the Order of the Grail/Valkyries, both student honoraries.

Source: Department of Political Science at University of North Carolina at Chapel Hill