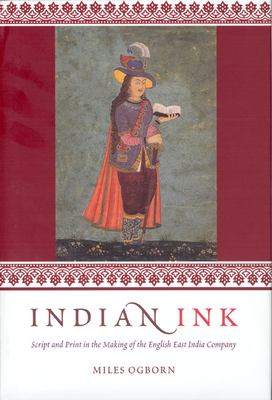 Indian Ink: Script and Print in the Making of the English East India Company

A commercial company established in 1600 to monopolize trade between England and the Far East, the East India Company grew to govern an Indian empire. Exploring the relationship between power and knowledge in European engagement with Asia, Indian Ink examines the Company at work and reveals how writing and print shaped authority on a global scale in the seventeenth and eighteenth centuries.

Tracing the history of the Company from its first tentative trading voyages in the early seventeenth century to the foundation of an empire in Bengal in the late eighteenth century, Miles Ogborn takes readers into the scriptoria, ships, offices, print shops, coffeehouses, and palaces to investigate the forms of writing needed to exert power and extract profit in the mercantile and imperial worlds. Interpreting the making and use of a variety of forms of writing in script and print, Ogborn argues that material and political circumstances always undermined attempts at domination through the power of the written word.

Navigating the juncture of imperial history and the history of the book, Indian Ink uncovers the intellectual and political legacies of early modern trade and empire and charts a new understanding of the geography of print culture.

Indian Ink: Script and Print in the Making of the English East India Company