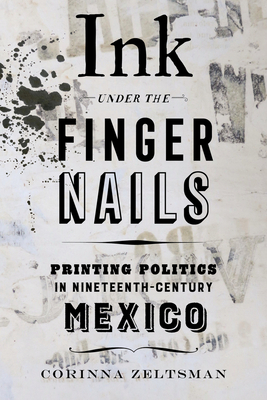 Ink Under the Fingernails: Printing Politics in Nineteenth-Century Mexico

During the independence era in Mexico, individuals and factions of all stripes embraced the printing press as a key weapon in the broad struggle for political power. Taking readers into the printing shops, government offices, courtrooms, and streets of Mexico City, historian Corinna Zeltsman reconstructs the practical negotiations and discursive contests that surrounded print over a century of political transformation, from the late colonial era to the Mexican Revolution. Centering the diverse communities that worked behind the scenes at urban presses, and examining their social practices and aspirations, Zeltsman explores how printer interactions with state and religious authorities shaped broader debates about press freedom and authorship. Beautifully crafted and ambitious in scope, Ink under the Fingernails sheds new light on Mexico's histories of state formation and political culture, identifying printing shops as unexplored spaces of democratic practice, where the boundaries between manual and intellectual labor blurred.
Ink Under the Fingernails: Printing Politics in Nineteenth-Century Mexico

My research examines the entangled history of print and politics in 19th-century Mexico, focusing on the material practices, communities, and political and social negotiations that shaped print production and press freedom.

My new book, “Ink under the Fingernails: Printing Politics in Nineteenth-Century Mexico,” argues that Mexico City printers served as key mediators in the new nation’s most pressing and violent conflicts and explores how their activities, creations, and ideas–developed through negotiating elite and working worlds–influenced Mexico’s political, cultural, and intellectual trajectory across the tumultuous 19th century.

I use my own training as a letterpress printer to examine print materials from a unique perspective: as material items that emerged through conscious professional choices and practices, and influenced viewer experience beyond literacy.

I am an Assistant Professor at Georgia Southern University, where I teach courses on Latin American and World History.