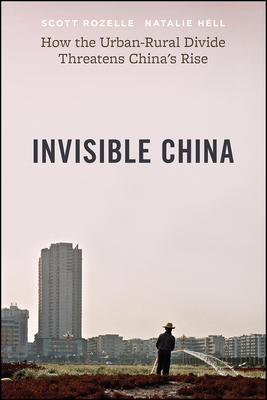 As the glittering skyline in Shanghai seemingly attests, China has quickly transformed itself from a place of stark poverty into a modern, urban, technologically savvy economic powerhouse. But as Scott Rozelle and Natalie Hell show in Invisible China, the truth is much more complicated and might be a serious cause for concern.

China's growth has relied heavily on unskilled labor. Most of the workers who have fueled the country's rise come from rural villages and have never been to high school. While this national growth strategy has been effective for three decades, the unskilled wage rate is finally rising, inducing companies inside China to automate at an unprecedented rate and triggering an exodus of companies seeking cheaper labor in other countries. Ten years ago, almost every product for sale in an American Walmart was made in China. Today, that is no longer the case. With the changing demand for labor, China seems to have no good back-up plan. For all of its investment in physical infrastructure, for decades China failed to invest enough in its people. Recent progress may come too late. Drawing on extensive surveys on the ground in China, Rozelle and Hell reveal that while China may be the second-largest economy in the world, its labor force has one of the lowest levels of education of any comparable country. Over half of China's population--as well as a vast majority of its children--are from rural areas. Their low levels of basic education may leave many unable to find work in the formal workplace as China's economy changes and manufacturing jobs move elsewhere.

In Invisible China, Rozelle and Hell speak not only to an urgent humanitarian concern but also a potential economic crisis that could upend economies and foreign relations around the globe. If too many are left structurally unemployable, the implications both inside and outside of China could be serious. Understanding the situation in China today is essential if we are to avoid a potential crisis of international proportions. This book is an urgent and timely call to action that should be read by economists, policymakers, the business community, and general readers alike.

Scott Rozelle is the Helen F. Farnsworth Senior Fellow and the co-director of Stanford Center on China's Economy and Institutions in the Freeman Spogli Institute for International Studies and Stanford Institute for Economic Policy Research at Stanford University. He received his BS from the University of California, Berkeley, and his MS and PhD from Cornell University.

Previously, Rozelle was a professor at the University of California, Davis and an assistant professor in Stanford’s Food Research Institute and department of economics. He currently is a member of several organizations, including the American Economics Association, the International Association for Agricultural Economists, and the Association for Asian Studies.

Rozelle also serves on the editorial boards of Economic Development and Cultural Change, Agricultural Economics, the Australian Journal of Agricultural and Resource Economics, and the China Economic Review.

His research focuses almost exclusively on China and is concerned with: agricultural policy, including the supply, demand, and trade in agricultural projects; the emergence and evolution of markets and other economic institutions in the transition process and their implications for equity and efficiency; and the economics of poverty and inequality, with an emphasis on rural education, health and nutrition.

Rozelle's papers have been published in top academic journals, including Science, Nature, American Economic Review, and the Journal of Economic Literature. He is fluent in Chinese and has established a research program in which he has close working ties with several Chinese collaborators and policymakers. For the past 20 years, Rozelle has been the chair of the International Advisory Board of the Center for Chinese Agricultural Policy; a co-director of the University of California's Agricultural Issues Center; and a member of Stanford's Walter H. Shorenstein Asia-Pacific Research Center and the Center on Food Security and the Environment.

In recognition of his outstanding achievements, Rozelle has received numerous honors and awards, including the Friendship Award in 2008, the highest award given to a non-Chinese by the Premier; and the National Science and Technology Collaboration Award in 2009 for scientific achievement in collaborative research.