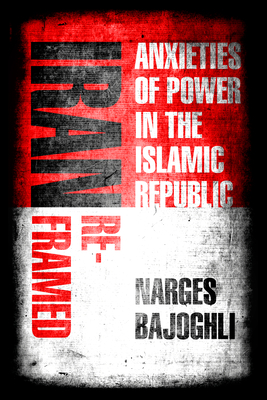 Iran Reframed: Anxieties of Power in the Islamic Republic

An inside look at what it means to be pro-regime in Iran, and the debates around the future of the Islamic Republic.

More than half of Iran's citizens were not alive at the time of the 1979 Revolution. Now entering its fifth decade in power, the Iranian regime faces the paradox of any successful revolution: how to transmit the commitments of its political project to the next generation. New media ventures supported by the Islamic Republic attempt to win the hearts and minds of younger Iranians. Yet members of this new generation--whether dissidents or fundamentalists--are increasingly skeptical of these efforts.

Iran Reframed offers unprecedented access to those who wield power in Iran as they debate and define the future of the Republic. Over ten years, Narges Bajoghli met with men in Iran's Revolutionary Guard, Ansar Hezbollah, and Basij paramilitary organizations to investigate how their media producers developed strategies to court Iranian youth. Readers come to know these men--what the regime means to them and their anxieties about the future of their revolutionary project. Contestation over how to define the regime underlies all their efforts to communicate with the public. This book offers a multilayered story about what it means to be pro-regime in the Islamic Republic, challenging everything we think we know about Iran and revolution.

Iran Reframed: Anxieties of Power in the Islamic Republic

Professor Bajoghli received her PhD in socio-cultural anthropology from New York University, where her dissertation was awarded the Dean's Outstanding Dissertation Award in the Social Sciences. She was also trained as a documentary filmmaker in NYU's Culture and Media Program.

Professor Bajoghli is currently working on three new research projects. At SAIS Johns Hopkins, she teaches classes on media, contemporary Iranian society, and ethnographic research methods to masters and PhD students. She is also an organizer of the Rethinking Iran Initiative at SAIS, which includes a series of public events and attendant research projects.

In addition to her academic writing, Professor Bajoghli has also written for such publications as The New York Times, The New York Times Magazine, Foreign Affairs, The Guardian, Foreign Policy, and Jacobin. She has also appeared as a guest commentator on Iranian politics on CNN, DemocracyNow!, NPR, BBC WorldService, BBC NewsHour, and PBS NewsHour as well as in Spanish on radio across Latin America.

Outside of academia, Professor Bajoghli has created non-profit organizations, was a community organizer, and has crated cultural programming and exchanges in the United States, Iran, and Cuba for two decades.