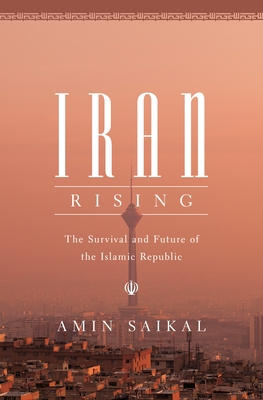 Iran Rising: The Survival and Future of the Islamic Republic

When Iranians overthrew their pro-Western monarchy in favor of an Islamic regime in 1979, many observers predicted that revolutionary turmoil would paralyze the country for years to come. Yet in the decades since, Iran has emerged as a key player in the Middle East and the wider world. In Iran Rising, renowned Iran specialist Amin Saikal describes how the Islamic Republic has managed to survive despite ongoing domestic struggles, Western sanctions, and other serious challenges. Amid heightened global anxiety over alliances, terrorism, and nuclear threats, Iran Rising offers essential reading for understanding a country that, more than ever, is a force to watch.
Iran Rising: The Survival and Future of the Islamic Republic

Amin Saikal is Professor of Political Science and Director of the Centre for Arab and Islamic Studies (the Middle East and Central Asia) at the Australian National University. Professor Saikal has been a visiting fellow at Princeton University, Cambridge University, and the Institute of Development Studies at the University of Sussex, as well as a Rockefeller Foundation Fellow in International Relations (1983-1988). He was awarded the Order of Australia (AM) in January 2006 for his services to international community and education as well as an advisor and author.

He is the author of numerous works on the Middle East, Central Asia, and Russia. His latest publications include Modern Afghanistan: A History of Struggle and Survival, London: I.B. Tauris, 2012; The Rise and Fall of the Shah: Iran from Autocracy to Religious Rule, Princeton: Princeton University Press 2009; Islam and the West: Conflict or Cooperation?, London: Palgrave, 2003. (Co-editor) American Democracy Promotion in the Middle East: From Bush to Obama, London: Routledge, 2012; ‘Islamism, the Iranian Revolution and the Soviet Invasion of Afghanistan’, The Cambridge History of the Cold War, Cambridge: Cambridge University Press, 2010.

He has also published numerous scholarly articles in International Journals, and chapters in edited volumes. Further, he has published many Op-Ed pieces in a number of national and international dailies, including The International Herald Tribune, The Wall Street Journal, The New York Times, and The Guardian, and is a frequent commentator on issues related to the Middle East and Central Asia on radio and television.