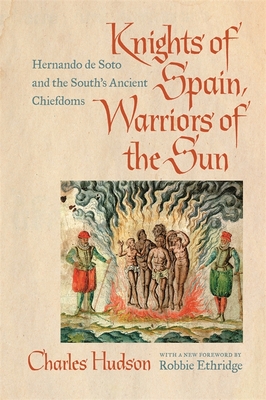 Knights of Spain, Warriors of the Sun: Hernando de Soto and the South's Ancient Chiefdoms

Between 1539 and 1542 Hernando de Soto led a small army on a desperate journey of exploration of almost four thousand miles across the U. S. Southeast. Until the 1998 publication of Charles M. Hudson's foundational Knights of Spain, Warriors of the Sun, De Soto's path had been one of history's most intriguing mysteries. With this book, anthropologist Charles Hudson offers a solution to the question, Where did de Soto go? Using a new route reconstruction, for the first time the story of the de Soto expedition can be laid on a map, and in many instances it can be tied to specific archaeological sites.

Arguably the most important event in the history of the Southeast in the sixteenth century, De Soto's journey cut a bloody and indelible swath across both the landscape and native cultures in a quest for gold and personal glory. The desperate Spanish army followed the sunset from Florida to Texas before abandoning its mission. De Soto's one triumph was that he was the first European to explore the vast region that would be the American South, but he died on the banks of the Mississippi River a broken man in 1542.

With a new foreword by Robbie Ethridge reflecting on the continuing influence of this now classic text, the twentieth-anniversary edition of Knights is a clearly written narrative that unfolds against the exotic backdrop of a now extinct social and geographic landscape. Hudson masterfully chronicles both De Soto's expedition and the native societies he visited. A blending of archaeology, history, and historical geography, this is a monumental study of the sixteenth-century Southeast.

Knights of Spain, Warriors of the Sun: Hernando de Soto and the South's Ancient Chiefdoms

CHARLES M. HUDSON (1932-2013) was the Franklin Professor of Anthropology and History at the University of Georgia and was one of the foremost authorities on the history and culture of the Indians of the U.S. Southeast. His books include Black Drink and The Forgotten Centuries (both Georgia).