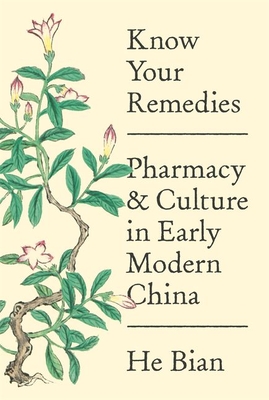 Know Your Remedies: Pharmacy and Culture in Early Modern China

A cultural history of the concept of pharmacy, both the material nature of drugs and the trade in medicine, in early modern China

Know Your Remedies presents a panoramic inquiry into China's early modern cultural transformation through the lens of pharmacy. In the history of science and civilization in China, pharmacy--as a commercial enterprise and as a branch of classical medicine--resists easy characterization. While China's long tradition of documenting the natural world through state-commissioned pharmacopeias, known as bencao, dwindled after the sixteenth century, the ubiquitous presence of Chinese pharmacy shops around the world today testifies to the vitality of Traditional Chinese Medicine. Rejecting narratives of intellectual stagnation or an unchanging folk culture, He Bian argues that pharmacy's history in early modern China can best be understood as a dynamic interplay between elite and popular culture.

Beginning with decentralizing trends in book culture and fiscal policy in the sixteenth century, Bian reveals pharmacy's central role in late Ming public discourse. Fueled by factional politics in the early 1600s, amateur investigation into pharmacology reached peak popularity among the literati on the eve of the Qing conquest in the mid-seventeenth century. The eighteenth century witnessed a systematic reclassification of knowledge, as the Qing court turned away from pharmacopeia in favor of a demedicalized natural history. Throughout this time, growth in long-distance trade enabled the rise of urban pharmacy shops, generating new knowledge about the natural world.

Bringing together a wealth of primary sources, Know Your Remedies makes an essential contribution to the study of Chinese history and the history of medicine.

Know Your Remedies: Pharmacy and Culture in Early Modern China

He Bian (Ch. ??) is a historian of late imperial and a historian of science. She got her Ph.D. in History of Science from Harvard University in 2014. Her research interests span many topics pertaining to the question of authority and variation in China’s traditional culture, particularly in medicine and the natural sciences, between the sixteenth and nineteenth centuries. Overall, her passion lies in writing a new kind of Chinese cultural history that foregrounds knowledge of all kinds, and is also rigorously contextualized by institutional, social, and economic conditions of the day.

Professor Bian's first book, Know Your Remedies: Pharmacy and Early Modern Culture in China, 1500-1800 (link is external)came out from Princeton University Press in Spring 2020. An interview with the New Books Network can be found here.(link is external)

She is at work on her second book project, The Formula of Happiness: A Social History of Medical Recipes in China’s Long Eighteenth Century. In academic year 2020-21, she is on leave researching this book project as a Henry Luce Foundation / ACLS Early Career Fellow, with additional funding from the National Endowment for Humanities. She is also writing a co-authored book on Manchu plant and animal names with Dr. Mårten Söderblom Saarela at Academia Sinica.

At Princeton, Professor Bian teaches introductory courses to Modern East Asia (HIS 208) and Early Modern China (HIS 324), an upper-level seminar on Medicine and Society in China (HIS 472), and a range of graduate seminars. She advises undergraduate and graduate students on topics related to Ming-Qing history, East Asian science, technology and medicine, and Manchu Studies. She has been recently elected President of the Manchu Studies Group(link is external) 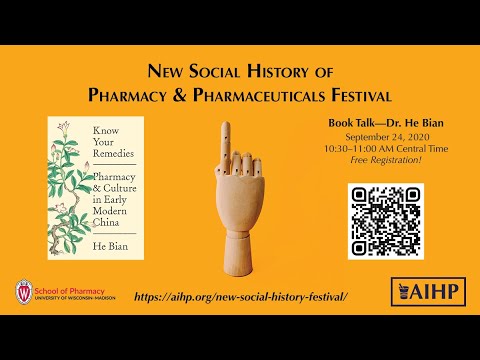