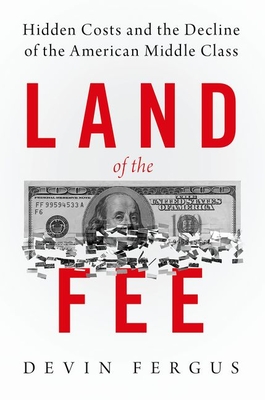 Land of the Fee: Hidden Costs and the Decline of the American Middle Class

The loans ordinary Americans take out to purchase homes and attend college often leave them in a sea of debt. As Devin Fergus explains in Land of the Fee, a not-insignificant portion of that debt comes in the form of predatory hidden fees attached to everyday transactions. Beginning in the 1980s, lobbyists for the financial industry helped dismantle consumer protections, resulting in surreptitious fees-often waived for those who can afford them but not for those who can't. Bluntly put, these hidden fees unfairly keep millions of Americans from their hard-earned money.

Journalists and policymakers have identified the primary causes of increasing wealth inequality-fewer good working class jobs, a rise in finance-driven speculative capitalism, and a surge of tax policy decisions that benefit the ultra-rich, among others. However, they miss one commonplace but substantial contributor to the widening divide between the rich and the rest: the explosion of fees on every transaction people make in their daily lives.

Land of the Fee traces the system of fees from its origins in the deregulatory wave of the late 1970s to the present. The average consumer now pays a dizzying array of charges for mortgage contracts, banking transactions, auto insurance rates, college payments, and payday loans. These fees are buried in the pages of small-print agreements that few consumers read or understand. Because these fees do not fall under usury laws, they have redistributed wealth to large corporations and their largest shareholders. By exposing this predatory and nearly invisible system of fees, Land of the Fee reshapes our understanding of wealth inequality in America.

Land of the Fee: Hidden Costs and the Decline of the American Middle Class

Devin Fergus is the Arvarh E. Strickland Distinguished Professor of History and Black Studies. His research focuses on political economy, policy, and inequality in modern America. Professor Fergus is the author of Land of the Fee (Oxford, 2018) which the explores the hidden costs of rising financial fees at home, school, work, and transportation on wealth and mobility in modern America. A much-anticipated work, Land of the Fee has been called one of the five best books for understanding capitalism today. His current research project examines white-collar crime and the racial wealth gap.

Fergus is guest editor of the special issue Banking without Borders: Culture and Credit in the New Financial World for Kalfou, a journal published by Temple University Press. This special issue examines the impact of four decades of financial deregulation in the US on vulnerable populations, which has increasingly affected the middle class. He has written widely on policy, political economy, and inequality for the New York Times, Washington Post, and the Guardian. Along with Louis Hyman, Bethany Moreton, and Julia Ott, Professor Fergus is also editor of the Columbia Studies in the History of U.S. Capitalism book series published by Columbia University Press.

Professor Fergus has worked closely with several national policy organizations (e.g., Demos, Closing the Racial Wealth Gap Initiative, the Center for Global Policy Solutions, and Prosperity Now) and has presented research to a number of federal entities, including the US Treasury, US Department of Education, the Consumer Financial Protection Bureau, and the Special Master (Kenneth Feinberg) for TARP Executive Compensation. Professor Fergus received his PhD in American history from Columbia University.