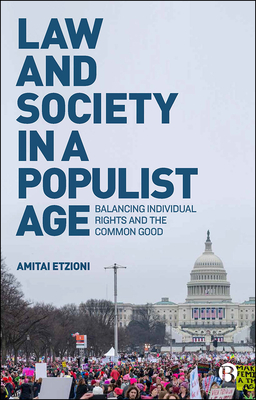 Law and Society in a Populist Age: Balancing Individual Rights and the Common Good

The law-based, political institutions in many democratic societies are being challenged by fast-growing populist movements, parties, and leaders. In other nations, the state is failing. These seismic changes call for greater attention to be paid to the role society plays in forming and challenging laws--and how the law copes with these challenges. Amitai Etzioni, one of the most respected thinkers in the US, argues for a new liberal communitarian approach as an effective response to populism. This recognizes that different members of the society have differing values, interests, and needs that cannot be fully reconciled to legislation in a populist age. The book considers the core challenge in a variety of contexts, including national security versus privacy, private sector responsibility, freedom of the press, campaign finance reform, regulatory law and the legal status of terrorists. Thus the book offers a timely discussion of key issues for contemporary society and the relationship of the law to the citizen in a fast-changing environment.
Law and Society in a Populist Age: Balancing Individual Rights and the Common Good