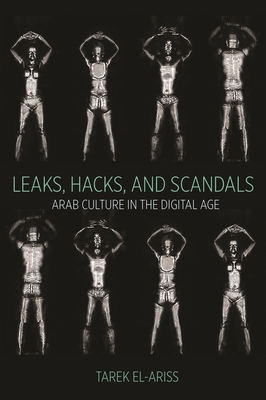 Leaks, Hacks, and Scandals: Arab Culture in the Digital Age

How digital media are transforming Arab culture, literature, and politics

In recent years, Arab activists have confronted authoritarian regimes both on the street and online, leaking videos and exposing atrocities, and demanding political rights. Tarek El-Ariss situates these critiques of power within a pervasive culture of scandal and leaks and shows how cultural production and political change in the contemporary Arab world are enabled by digital technology yet emerge from traditional cultural models. Focusing on a new generation of activists and authors from Egypt and the Arabian Peninsula, El-Ariss connects WikiLeaks to The Arabian Nights, Twitter to mystical revelation, cyberattacks to pre-Islamic tribal raids, and digital activism to the affective scene-making of Arab popular culture. He shifts the epistemological and historical frameworks from the postcolonial condition to the digital condition and shows how new media challenge the novel as the traditional vehicle for political consciousness and intellectual debate. Theorizing the rise of the leaking subject who reveals, contests, and writes through chaotic yet highly political means, El-Ariss investigates the digital consciousness, virality, and affective forms of knowledge that jolt and inform the public and that draw readers in to the unfolding fiction of scandal. Leaks, Hacks, and Scandals maps the changing landscape of Arab modernity, or Nahda, in the digital age and traces how concepts such as the nation, community, power, the intellectual, the author, and the novel are hacked and recoded through new modes of confrontation, circulation, and dissent.
Leaks, Hacks, and Scandals: Arab Culture in the Digital Age

Tarek El-Ariss is the James Wright Professor at Dartmouth College and Guggenheim Fellow 2021-22.

Professor Ariss is trained in philosophy, comparative literature, and visual and cultural studies and works across disciplines and languages to examine notions of the subject, community, and modernity in Arabic culture, literature, and art.

His research interests include new media and cyber culture; literary theory and digital humanities; Nahda and modernity studies; travel writing and the war novel; sci-fi and utopia studies; 18th- and 19th-century French philosophy and literature; and gender and sexuality studies. He is author of Trials of Arab Modernity: Literary Affects and the New Political and Leaks, Hacks, and Scandals: Arab Culture in the Digital Age, and editor of the MLA anthology, The Arab Renaissance: A Bilingual Anthology of the Nahda.