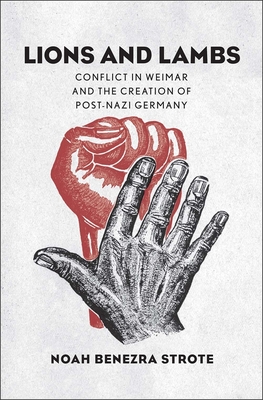 Lions and Lambs: Conflict in Weimar and the Creation of Post-Nazi Germany

A bold new interpretation of Germany's democratic transformation in the twentieth century, focusing on the generation that shaped the post-Nazi reconstruction

Not long after the horrors of World War II and the Holocaust, Germans rebuilt their shattered country and emerged as one of the leading nations of the Western liberal world. In his debut work, Noah Strote analyzes this remarkable turnaround and challenges the widely held perception that the Western Allies--particularly the United States--were responsible for Germany's transformation. Instead, Strote draws from never-before-seen material to show how common opposition to Adolf Hitler united the fractious groups that had once vied for supremacy under the Weimar Republic, Germany's first democracy (1918-1933). His character-driven narrative follows ten Germans of rival worldviews who experienced the breakdown of Weimar society, lived under the Nazi dictatorship, and together assumed founding roles in the democratic reconstruction.

While many have imagined postwar Germany as the product of foreign-led democratization, this study highlights the crucial role of indigenous ideas and institutions that stretched back decades before Hitler. Foregrounding the resolution of key conflicts that crippled the country's first democracy, Strote presents a new model for understanding the origins of today's Federal Republic.

Lions and Lambs: Conflict in Weimar and the Creation of Post-Nazi Germany

Noah Strote earned his Ph.D. at UC Berkeley in 2011 and has also studied at Columbia University in the City of New York and the Humboldt University of Berlin.  He offers lectures in modern European history and German history, as well as seminars in selected topics such as Fascism and National Socialism, imperialism, the Holocaust, and the Cold War.