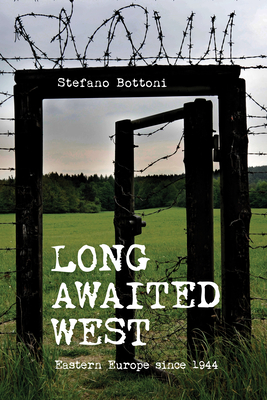 What is Eastern Europe and why is it so culturally and politically separate from the rest of Europe? In Long Awaited West, Stefano Bottoni considers what binds these countries together in an increasingly globalized world. Focusing on economic and social policies, Bottoni explores how Eastern Europe developed and, more importantly, why it remains so distant from the rest of the continent. He argues that this distance arises in part from psychological divides which have only deepened since the global economic crisis of 2008, and provides new insight into Eastern Europe's significance as it finds itself located - both politically and geographically - between a distracted European Union and Russia's increased aggressions.

Stefano Bottoni is a senior research fellow at the Institute of History, Research Centre for the Humanities, Hungarian Academy of Sciences and a visiting fellow at the Imre Kertész Kolleg, Jena (March-November 2015). Between 2005 and 2013, he held courses on the history of contemporary Eastern Europe at the University of Bologna.

His main fields of interest include the political and social history of Eastern Europe under the socialist regimes, with a special focus on national policies in Romania and the Hungarian minority of Transylvania. He has taken part in several international research projects, including “Schleichwege”: Inoffizielle  Begegnungen und Kontakte sozialistischer Staatsbürger 1956 – 1989 (Volkswagen Stiftung), and Physical Violence in State Socialism (Zentrum für Zeithistorische Forschung).

Stefano Bottoni was a Visiting Fellow at Institut Montaigne in April 2019.

Stefano Bottoni, PhD in Modern and Contemporary History (University of Bologna, 2005), is senior fellow at the Institute of History of Research Centre for the Humanities at the Hungarian Academy of Sciences.