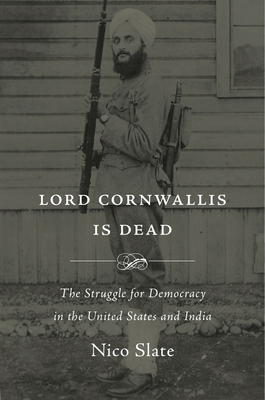 Lord Cornwallis Is Dead: The Struggle for Democracy in the United States and India

Do democratic states bring about greater social and economic equality among their citizens? Modern India embraced universal suffrage from the moment it was free of British imperial rule in 1947--a historical rarity in the West--and yet Indian citizens are far from realizing equality today. The United States, the first British colony to gain independence, continues to struggle with intolerance and the consequences of growing inequality in the twenty-first century.

From Boston Brahmins to Mohandas Gandhi, from Hollywood to Bollywood, Nico Slate traces the continuous transmission of democratic ideas between two former colonies of the British Empire. Gandhian nonviolence lay at the heart of the American civil rights movement. Key Indian freedom fighters sharpened their political thought while studying and working in the United States. And the Indian American community fought its own battle for civil rights.

Spanning three centuries and two continents, Lord Cornwallis Is Dead offers a new look at the struggle for freedom that linked two nations. While the United States remains the world's most powerful democracy, India--the world's most populous democracy--is growing in wealth and influence. Together, the United States and India will play a predominant role in shaping the future of democracy.

Lord Cornwallis Is Dead: The Struggle for Democracy in the United States and India

Dr. Slate is currently at work on two books: a study of race in Los Angeles after 1965 and a history of truth and power in the American civil rights movement. In his research and teaching, he loves asking questions like the following: What’s the relationship between truth and power? How can the history of democracy contribute to the future of democracy? How do social movements learn? And how do they teach? Why is there so much racism, xenophobia, and intolerance in our world and what can we do about it? How do universities contribute to inequality? How can they reduce inequality?

Dr. Slate is the founder and director of the Bajaj Rural Development Lab and SocialChange101.org. Born in Los Angeles and raised in California's Mojave Desert, he earned degrees in Earth Systems and the Interdisciplinary Studies in the Humanities from Stanford University and in Environmental Change and Management from Oxford University before completing his Ph.D. in History at Harvard University.