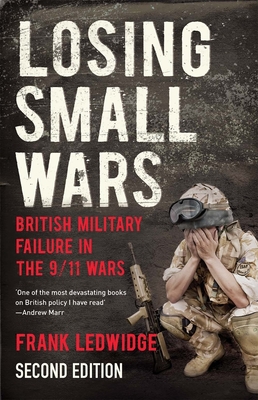 This new edition of Frank Ledwidge's eye-opening analysis of British involvement in Iraq and Afghanistan unpicks the causes and enormous costs of military failure. Updated throughout, and with fresh chapters assessing and enumerating the overall military performance since 2011--including Libya, ISIS, and the Chilcot findings--Ledwidge shows how lessons continue to go unlearned. A brave and important book; essential reading for anyone wanting insights into the dysfunction within the British military today, and the consequences this has on the lives of innocent civilians caught up in war.--Times Literary Supplement
Losing Small Wars: British Military Failure in the 9/11 Wars

Frank spent fifteen years at the front end of British foreign policy, dealing with problems such as torture, human trafficking and war crimes in the Balkans, Central Asia and the Middle East. Prior to that, he worked for seven years as a barrister in his home town of Liverpool and throughout the North of England, working mostly in the criminal and family jurisdictions.  He was an officer in the Royal Naval Reserve for 15 years and served operational tours in the Balkans and Iraq.

Frank was seconded by the British government to the Organisation for Security and Co-operation in Europe for 7 years.  He worked in Kosovo, Albania and much of the former Soviet Union in international human rights protection, criminal law reform, and institution building at the highest levels of government.  Later he served as the first ‘Justice Advisor’ to the UK Mission in Helmand Province in 2007-2008 and worked in a similar role at the UK Embassy in Libya during and after the war there. He haslectured all over the world on military culture, history and performance and has worked as a consultant in Europe, Africa and Asia.

Frank holds law degrees from Oxford and Huddersfield Universities and received his doctorate in war studies from Kings College London in 2015.

He is the author of several well-reviewed books and is regular commentator on national and international print and broadcast media.

Frank has given evidence to the UK House of Commons Defence Committee on National Strategy and has spoken at conferences all over the world on war and law. In 2016 he was privileged to deliver one of Cambridge University's annual 'Darwin Lectures'.