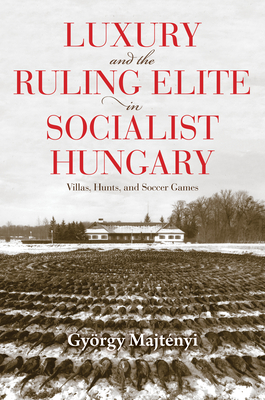 Luxury and the Ruling Elite in Socialist Hungary: Villas, Hunts, and Soccer Games

After World War II, a new community of elite emerged in Hungary, in spite of the communist principles espoused by the government. In Luxury and the Ruling Elite in Socialist Hungary, Gy�rgy Majt�nyi allows us a peek inside their affluence.

Majt�nyi exposes the lavish standard of living that the higher echelon enjoyed, complete with pools, Persian rugs, extravagant furniture, servants, and groundskeepers. They shopped in private stores stocked with expensive meats and tropical fruits just for them. They benefited from access to everything from books, telephone lines, and international travel to hunting grounds, soccer games, and even the choicest cemetery plots. But Majt�nyi also reveals the underbelly of such society, particularly how these privileges were used as a way of maintaining power, initiating or denying entry to party members, and strengthening the very hierarchies that communism promised to abolish.

Taking readers on a fascinating and often surprising look inside the manor homes and vacation villas of wealthy post-World War II Hungarians, Majt�nyi offers fresh insight into the realities of patriarchy, loyalty, gender, and class within the communist regime.

Luxury and the Ruling Elite in Socialist Hungary: Villas, Hunts, and Soccer Games