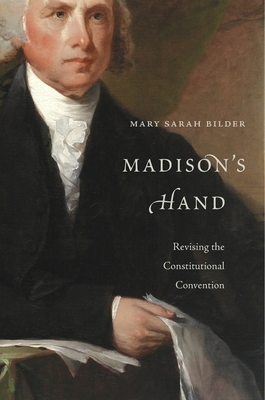 James Madison's Notes on the 1787 Constitutional Convention have acquired nearly unquestioned authority as the description of the U.S. Constitution's creation. No document provides a more complete record of the deliberations in Philadelphia or depicts the Convention's charismatic figures, crushing disappointments, and miraculous triumphs with such narrative force. But how reliable is this account?

[A] superb study of the Constitutional Convention as selectively reflected in Madison's voluminous notes on it...Scholars have been aware that Madison made revisions in the Notes but have not intensively explored them. Bilder has looked closely indeed at the Notes and at his revisions, and the result is this lucid, subtle book. It will be impossible to view Madison's role at the convention and read his Notes in the same uncomplicated way again...An accessible and brilliant rethinking of a crucial moment in American history.
--Robert K. Landers, Wall Street Journal

She was a law clerk to the Hon. Francis Murnaghan, Jr., U.S. Court of Appeals, Fourth Circuit. Her recent work has focused on the history of the Constitution, James Madison and the Founders, the history of judicial review, and colonial and founding era constitutionalism. Professor Bilder is a member of the American Law Institute, the Colonial Society of Massachusetts, the Massachusetts Historical Society, and a Fellow of the American Bar Foundation and American Antiquarian Society.

She serves as Literary Director of the Ames Foundation. She is member of the Massachusetts Bar Association (inactive status) and the State Bar of Wisconsin (inactive status). She was given the Emil Slizewski Faculty Teaching Award in 2007 and 2018 and was named Michael and Helen Lee Distinguished Scholar in 2009. She was named the Founders Professor of Law in 2016.

Her most recent book, Madison's Hand: Revising the Constitutional Convention, was awarded the 2016 Bancroft Prize in American History and Diplomacy, the James C. Bradford Prize for Biography from the Society for Historians of the Early Republic, and was named a finalist for the George Washington Book Prize. Richard Beeman, author of Our Lives, Our Fortunes and Our Sacred Honor, called it "an exceptionally important piece of work that will have a profound impact on all future work on the Constitutional Convention." Read more reviews.

She is the author of The Transatlantic Constitution: Colonial Legal Culture and the Empire (Harvard University Press, 2004), awarded the Littleton-Griswold Award from the American Historical Association. Her articles appear in several important collected volumes of essays and a wide variety of journals, including the Yale Law Journal, the Stanford Law Review, the Yale Journal of Law and the Humanities, the George Washington Law Review, Law and History Review, Law Library Journal, and the Journal of Policy History.

She co-edited Blackstone in America: Selected Essays of Kathryn Preyer (Cambridge University Press, 2009). She is also the co-author of Appeals to the Privy Council from the American Colonies, a two-part prize-winning database and print publication. Recently, she has co-authored an article on the library of Robert Morris, the important African American lawyer and civil rights activist.

Her third book, Female Genius: Eliza Harriot and George Washington at the Dawn of the Constitution will be available from the University of Virginia Press in early March 2022, based on the remarkable life and constitutional influence of Elizabeth Harriot Barons O'Connor, a female lecturer and educator in Philadelphia in the summer of 1787.

She has received a William Nelson Cromwell Foundation Grant, the Boston College Annual Prize for Scholarship, a Boston College Distinguished Research Award, a Mellon Fellowship in the Humanities, and was a Boston College Law School Fund Scholar. She has served on the boards of various journals (Law and History Review,

The Journal of Legal Education, The New England Quarterly). From 2013-2019, she served on the bipartisan Advisory Committee on Massachusetts Judicial Nominations. She was the Lucy G. Moses Visiting Professor at Columbia Law School in 2001 and was a visiting professor at Harvard Law School in the spring of 2008. In 2018, she was the Mount Vernon Distinguished Visiting Lecturer of American History.

Professor Bilder is the author of a renowned blog entry on how to teach the Rule Against Perpetuities in one class hour, has been interviewed by The Documentary Group for the Constitution Project, History Channel, and Q & A, has done numerous radio and podcast interviews, is an occasional blog and op-ed author, and served as a legal history consultant to Steven Spielberg on Amistad.

She appears in two popular Annenberg Classroom videos (Magna Carta and the Constitution and The Supremacy Clause: McCullouch v. Maryland) and has spoken at the National Archives, the Library of Congress, the National Constitution Center, the Museum of the American Revolution, the Huntington Library, Mount Vernon, and Montpelier.