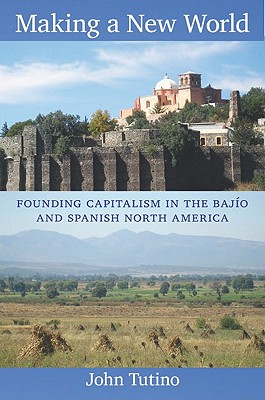 Making a New World: Founding Capitalism in the Bajío and Spanish North America

Making a New World is a major rethinking of the role of the Americas in early world trade, the rise of capitalism, and the conflicts that reconfigured global power around 1800. At its center is the Baj�o, a fertile basin extending across the modern-day Mexican states of Guanajuato and Quer�taro, northwest of Mexico City. The Baj�o became part of a new world in the 1530s, when Mesoamerican Otom�s and Franciscan friars built Quer�taro, a town that quickly thrived on agriculture and trade. Settlement accelerated as regional silver mines began to flourish in the 1550s. Silver tied the Baj�o to Europe and China; it stimulated the development of an unprecedented commercial, patriarchal, Catholic society. A frontier extended north across vast expanses settled by people of European, Amerindian, and African ancestry. As mining, cloth making, and irrigated cultivation increased, inequities deepened and religious debates escalated. Analyzing the political economy, social relations, and cultural conflicts that animated the Baj�o and Spanish North America from 1500 to 1800, John Tutino depicts an engine of global capitalism and the tensions that would lead to its collapse into revolution in 1810.
Making a New World: Founding Capitalism in the Bajío and Spanish North America

I am a teacher and historian of Mexico in the context of the Americas and the World. I aim to understand the histories of popular communities as they engaged colonial rule and early capitalism, national states and industrial challenges, revolutionary promises and national development--and now the unprecedented uncertainties of globalization and explosive urbanism.

In the process, I search for ways to integrate studies of the environment, production, and state power with an emphasis on labor, ethnic, and gender relations, and on the cultural constructions that debate everything. In other words, I study Mexican communities seeking a more integrated history--and and I try to explore that history over the long run and in global context. To bring those perspectives into the classroom, for undergraduates I teach the historical foundations of Latin America, 1400-1800, as well as the history of Mexico, its revolutions, and its integrations with the United States.

With graduate students, my courses focus on exploring the diversity of the Americas as they engaged the world after 1500, and the History of Mexico and its diverse communities, rural and urban, from the colonial period through the present. I try to rethink with students at all levels the roots of global capitalism in the Americas before 1880, the transformations that marginalized Latin America in the industrial era after 1800, the experiments in national development after 1910, and the coming of globalization.

My emphasis is not just that global powers have shaped communities across Mexico and the Americas, but that those communities have created the modern world--and thus their own worlds--in ways ranging from adaptation to negotiation to revolution--and migration. My primary comparative interests focus on Central America and the Caribbean, Brazil, and increasingly the United States--all viewed in global contexts.

When I leave the department (which my family knows is not often enough) my goal is to get to the Bay, the ocean, or the mountains--to exhale and remember that nature still rules, if only we will allow her. Finally, I am a long suffering citizen of the Red Sox Nation (yet open enough to accept a committed Yankees fan as a doctoral student). Recent triumphs threw the world into disarray. We of the Nation have lived knowing that the best of people will repeatedly fight the good fight--and despite valiant efforts, always fall short of victory.

We have no idea how to live in the glow of victory. Recent difficulties tell me the world stays its course.