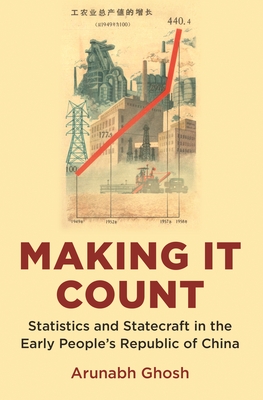 In 1949, at the end of a long period of wars, one of the biggest challenges facing leaders of the new People's Republic of China was how much they did not know. The government of one of the world's largest nations was committed to fundamentally reengineering its society and economy via socialist planning while having almost no reliable statistical data about their own country. Making It Count is the history of efforts to resolve this crisis in counting. Drawing on a wealth of sources culled from China, India, and the United States, Arunabh Ghosh explores the choices made by political leaders, statisticians, academics, statistical workers, and even literary figures in attempts to know the nation through numbers.

Ghosh shows that early reliance on Soviet-inspired methods of exhaustive enumeration became increasingly untenable in China by the mid-1950s. Unprecedented and unexpected exchanges with Indian statisticians followed, as the Chinese sought to learn about the then-exciting new technology of random sampling. These developments were overtaken by the tumult of the Great Leap Forward (1958-61), when probabilistic and exhaustive methods were rejected and statistics was refashioned into an ethnographic enterprise. By acknowledging Soviet and Indian influences, Ghosh not only revises existing models of Cold War science but also globalizes wider developments in the history of statistics and data.

Anchored in debates about statistics and its relationship to state building, Making It Count offers fresh perspectives on China's transition to socialism.

Arunabh Ghosh is a historian of modern China, with research and teaching interests in social and economic history, history of science and statecraft, transnational history, and China-India history.

Ghosh’s first book, Making it Count: Statistics and Statecraft in the early People's Republic of China (Princeton University Press, 2020), investigates how the early PRC state built statistical capacity to know the nation through numbers. He has conducted research for the book in Beijing, Guangzhou, New Delhi, and Kolkata, and his work has been supported by grants and fellowships from the Andrew F. Mellon Foundation, the American Council of Learned Societies, the Social Science Research Council, and Columbia University. His work has appeared in the Journal of Asian Studies, Osiris, the International Journal of Asian Studies, BJHS Themes, EASTS, and the PRC History Review.

Other research projects include a history of dam and reservoir construction in twentieth century China and a history of China-Indian networks of Science, ca. 1920-1980.

Ghosh's graduate offerings include seminars and pro-seminars on different aspects of twentieth century Chinese history and Asian environmental history. He also offers examination fields in Modern Chinese History. At the undergraduate level, he regularly offers a survey lecture on Modern China (1894-Present) and has conference courses on large-scale technological and social engineering projects in post-imperial China  and on the economic history of modern China.

Trained at Haverford College and at Tsinghua and Columbia universities, Ghosh joined the History Department in 2015 from the Harvard Academy for International and Area Studies, where he was an Academy Scholar for the 2014-15 AY.