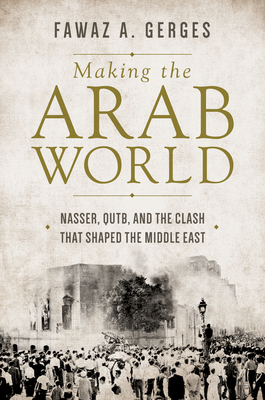 Making the Arab World: Nasser, Qutb, and the Clash That Shaped the Middle East

In 2013, just two years after the popular overthrow of Hosni Mubarak, the Egyptian military ousted the country's first democratically elected president--Mohamed Morsi of the Muslim Brotherhood--and subsequently led a brutal repression of the Islamist group. These bloody events echoed an older political rift in Egypt and the Middle East: the splitting of nationalists and Islamists during the rule of Egyptian president and Arab nationalist leader Gamal Abdel Nasser. In Making the Arab World, Fawaz Gerges, one of the world's leading authorities on the Middle East, tells how the clash between pan-Arab nationalism and pan-Islamism has shaped the history of the region from the 1920s to the present. Gerges tells this story through an unprecedented dual biography of Nasser and another of the twentieth-century Arab world's most influential figures--Sayyid Qutb, a leading member of the Muslim Brotherhood and the father of many branches of radical political Islam. Their deeply intertwined lives embody and dramatize the divide between Arabism and Islamism. Yet, as Gerges shows, beyond the ideological and existential rhetoric, this is a struggle over the state, its role, and its power. Based on a decade of research, including in-depth interviews with many leading figures in the story, Making the Arab World is essential reading for anyone who wants to understand the roots of the turmoil engulfing the Middle East, from civil wars to the rise of Al-Qaeda and ISIS.
Making the Arab World: Nasser, Qutb, and the Clash That Shaped the Middle East

Fawaz A. Gerges is Professor of International Relations at the London School of Economics and Political Science (LSE), and holder of the Emirates Professorship in Contemporary Middle East Studies. He was also the inaugural Director of the LSE Middle East Centre from 2010 until 2013.

He earned a doctorate from Oxford University and M.Sc. from the London School of Economics. Gerges has taught at Oxford, Harvard, and Columbia, and was a research scholar at Princeton and the chairholder of the Christian A. Johnson Chair in Middle Eastern Studies and International Affairs at Sarah Lawrence College, New York.

Gerges' upcoming book is The Hundred Years’ War for Control of the Middle East: From Sykes-Picot to the Deal of the Century (Princeton University Press, 2021).

Gerges has been the recipient of a MacArthur, Fullbright and Carnegie Fellowships and his books, including America and Political Islam: Clash of Cultures or Clash of Interests? (Cambridge University Press, 2000) and The Superpowers and the Middle East: Regional and International Politics (Oxford and Westview), have been translated into a number of foreign languages.

No armchair historian, Gerges was recently a Carnegie Scholar, where he completed extensive field study in the Middle East. Over the years, he has interviewed hundreds of civil society leaders, activists, and mainstream and radical Islamists in the Muslim world and within Muslim communities in Europe.

Gerges has given scores of interviews for various media outlets throughout the world, including ABC, CNN, BBC, PBS, CBS, NPR, CBC, Sky News, Al Jazeera, and LBC. He has been a guest on The Charlie Rose Show, The Oprah Winfrey Show, The Bill Moyers Journal, The NewsHour with Jim Lehrer, ABC Nightline, World News Tonight, Rachel Maddow Show (MSNBC), This Week, Good Morning America and other prominent shows. He was a senior ABC television news analyst from 2000 until 2007.