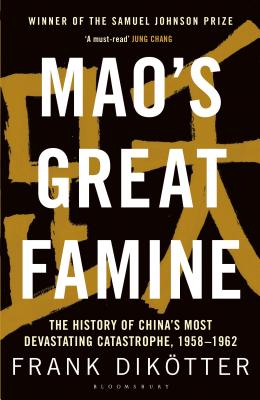 Mao's Great Famine: The History of China's Most Devastating Catastrophe, 1958-62

An unprecedented, groundbreaking history of China's Great Famine that recasts the era of Mao Zedong and the history of the People's Republic of China.

Between 1958 and 1962, China descended into hell. Mao Zedong threw his country into a frenzy with the Great Leap Forward, an attempt to catch up to and overtake Britain in less than fifteen years. The experiment ended in the greatest catastrophe the country had ever known, destroying tens of millions of lives.

So opens Frank Dik�tter's riveting, magnificently detailed chronicle of an era in Chinese history much speculated about but never before fully documented, as access to Communist Party archives has long been restricted to all but the most trusted historians. A new archive law has opened up thousands of central and provincial documents that fundamentally change the way one can study the Maoist era.

Dik�tter makes clear, as nobody has before, that far from being the program that would lift the country among the world's superpowers and prove the power of Communism, as Mao imagined, the Great Leap Forward transformed the country in the other direction. It became the site not only of one of the most deadly mass killings of human history--at least forty-five million people were worked, starved, or beaten to death--but also of the greatest demolition of real estate in human history, as up to one-third of all housing was turned into rubble. The experiment was a catastrophe for the natural world as well, as the land was savaged in the maniacal pursuit of steel and other industrial accomplishments. In a powerful meshing of exhaustive research in Chinese archives and narrative drive, Dik�tter, for the first time, links up what happened in the corridors of power--the vicious backstabbing and bullying tactics that took place among party leaders--with the everyday experiences of ordinary people, giving voice to the dead and disenfranchised. His magisterial account recasts the history of the People's Republic of China.

Mao's Great Famine: The History of China's Most Devastating Catastrophe, 1958-62