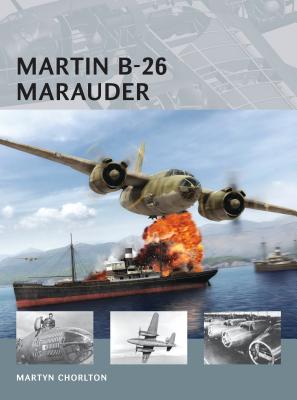 One of the most underrated medium bombers of the Second World War, the Martin B-26 Marauder never fully managed to shake off an underserved early reputation as a dangerous aircraft to fly. Admittedly, in inexperienced hands, the B-26 could be tricky to fly, but once mastered, proved to be one of the best in its class.

The aircraft incorporated a host of both revolutionary design methods and construction techniques, never before attempted amongst American aircraft manufacturers. Peyton M. Magruder's design had its roots in a USAAC proposal dating back to March 1939 calling for a twin-engined medium bomber capable of reaching 350 mph with a 2,000lb bomb load up to a range of 3,000 miles. Deemed superior to all other designs on the table at the time, almost a 1,000 had been ordered before the aircraft first took to the air November 1940.

From late 1941 the first B-26s became operational in the Pacific, followed by the Mediterranean, but it is in the European theatre that the type was most prolific. Initially serving with the 8th Air Force, the type was 'discarded' to the 9th Air Force with whom it served with great distinction for the remainder of the war. It was particularly during the Normandy Landings and later the advance beyond 'the bulge' into Germany, were the B-26s medium level tactical ability shone through.
The Marauder also served with the RAF, SAAF and Free French Air Force in the Mediterranean and also as part of the little credited Balkan Air Force in support of Tito's Partisans in Yugoslavia.

Sadly the B-26 was unfairly treated at the beginning of its career and even more so at the end as many of the 5,200+ aircraft built were scrapped only days after the end of the war. A great aircraft in many respects the B-26 deserves to be in a better place.