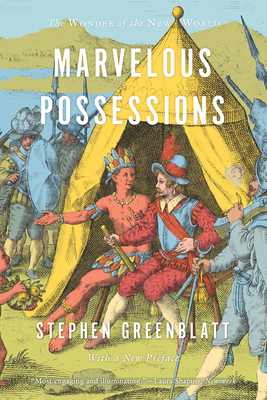 Marvelous Possessions: The Wonder of the New World

A masterwork of history and cultural studies, Marvelous Possessions is a brilliant meditation on the interconnected ways in which Europeans of the Age of Discovery represented non-European peoples and took possession of their lands, particularly in the New World. In a series of innovative readings of travel narratives, judicial documents, and official reports, Stephen Greenblatt shows that the experience of the marvelous, central to both art and philosophy, was manipulated by Columbus and others in the service of colonial appropriation. Much more than simply a collection of the odd and exotic, Marvelous Possessions is both a highly original extension of Greenblatt's thinking on a subject that has permeated his career and a thrilling tale of wandering, kidnapping, and go-betweens--of daring improvisation, betrayal, and violence. Reaching back to the ancient Greeks, forward to the present, and, in his new preface, even to fantastical meetings between humans and aliens in movies like Close Encounters of the Third Kind, Greenblatt would have us ask: How is it possible, in a time of disorientation, hatred of the other, and possessiveness, to keep the capacity for wonder--for tolerant recognition of cultural difference--from being poisoned?
Marvelous Possessions: The Wonder of the New World

Stephen Greenblatt is Cogan University Professor of the Humanities at Harvard University. He is the author of fourteen books, including Tyrant: Shakespeare on Politics; The Rise and Fall of Adam and Eve; The Swerve: How the World Became Modern; Shakespeare's Freedom; Will in the World: How Shakespeare Became Shakespeare; Hamlet in Purgatory; Marvelous Possessions; and Renaissance Self-Fashioning.

He is General Editor of The Norton Anthology of English Literature and of The Norton Shakespeare, has edited seven collections of criticism, and is a founding editor of the journal Representations. His honors include the 2016 Holberg Prize from the Norwegian Parliament, the 2012 Pulitzer Prize and the 2011 National Book Award for The Swerve, MLA’s James Russell Lowell Prize (twice), Harvard University’s Cabot Fellowship, the Distinguished Humanist Award from the Mellon Foundation, Yale’s Wilbur Cross Medal, the William Shakespeare Award for Classical Theatre, the Erasmus Institute Prize, two Guggenheim Fellowships and the Distinguished Teaching Award from the University of California, Berkeley.

Among his named lecture series are the Adorno Lectures in Frankfurt, the University Lectures at Princeton, and the Clarendon Lectures at Oxford, and he has held visiting professorships at universities in Beijing, Kyoto, London, Paris, Florence, Torino, Trieste, and Bologna, as well as the Renaissance residency at the American Academy in Rome.