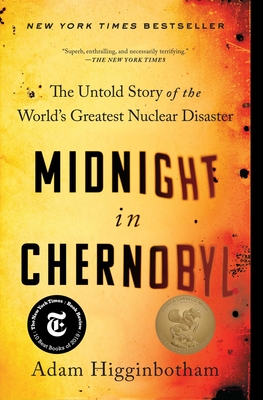 Midnight in Chernobyl: The Untold Story of the World's Greatest Nuclear Disaster

From journalist Adam Higginbotham, the New York Times bestselling account that reads almost like the script for a movie (The Wall Street Journal)--a powerful investigation into Chernobyl and how propaganda, secrecy, and myth have obscured the true story of one of the history's worst nuclear disasters.

Early in the morning of April 26, 1986, Reactor Number Four of the Chernobyl Atomic Energy Station exploded, triggering one of the twentieth century's greatest disasters. In the thirty years since then, Chernobyl has become lodged in the collective nightmares of the world: shorthand for the spectral horrors of radiation poisoning, for a dangerous technology slipping its leash, for ecological fragility, and for what can happen when a dishonest and careless state endangers its citizens and the entire world. But the real story of the accident, clouded from the beginning by secrecy, propaganda, and misinformation, has long remained in dispute.

Drawing on hundreds of hours of interviews conducted over the course of more than ten years, as well as letters, unpublished memoirs, and documents from recently-declassified archives, Adam Higginbotham brings the disaster to life through the eyes of the men and women who witnessed it firsthand. The result is a riveting, deeply reported reconstruction (Los Angeles Times) and a definitive account of an event that changed history: a story that is more complex, more human, and more terrifying than the Soviet myth.

The most complete and compelling history yet (The Christian Science Monitor), Higginbotham's superb, enthralling, and necessarily terrifying...extraordinary (The New York Times) book is an indelible portrait of the lessons learned when mankind seeks to bend the natural world to his will--lessons which, in the face of climate change and other threats, remain not just vital but necessary.

Midnight in Chernobyl: The Untold Story of the World's Greatest Nuclear Disaster

Adam Higginbotham was born in England in 1968.

His narrative non-fiction and feature writing has appeared in magazines including  The New Yorker, Wired, Smithsonian and The New York Times Magazine. Many of his stories have been optioned for development in film and TV.

His first book, Midnight In Chernobyl: The Untold Story of the World’s Greatest Nuclear Disaster, published in the United States by Simon & Schuster in 2019, is an international bestseller, and has been translated into 21 languages. It was named one of the New York Times’ Ten Best Books of the Year, won the 2020 William E. Colby Award  for military and intelligence writing, and awarded the 2020 Andrew Carnegie Medal for Excellence in Non-fiction. He is currently at work on a new book, about the history of the space shuttle and the 1986 Challenger disaster.

The former US correspondent for The Sunday Telegraph Magazine and editor-in-chief of The Face, he lives with his family in New York City.