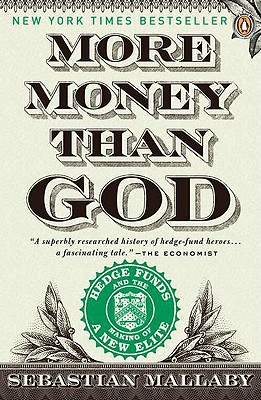 More Money Than God: Hedge Funds and the Making of a New Elite

Splendid...the definitive history of the hedge fund, a compelling narrative full of larger-than-life characters and dramatic tales. --The Washington Post

The first authoritative history of hedge funds-from their rebel beginnings to their role in defining the future of finance.

Wealthy, powerful, and potentially dangerous, hedge fund moguls have become the It Boys of twenty-first-century capitalism. Beating the market was long thought to be impossible, but hedge funds cracked its mysteries and made fortunes in the process. Drawing on his unprecedented access to the industry, esteemed financial writer Sebastian Mallaby tells the inside story of the hedge funds, from their origins in the 1960s to their role in the financial crisis of 2007 to 2009 - and explains why understanding the history of hedge funds is key to predicting the future of finance.

More Money Than God: Hedge Funds and the Making of a New Elite

Sebastian Mallaby is the Paul A. Volcker senior fellow for international economics at the Council on Foreign Relations (CFR). An experienced journalist and public speaker, Mallaby is also a contributing columnist for the Washington Post, where he previously served as a staff columnist and editorial board member. He is the author of The Man Who Knew: The Life & Times of Alan Greenspan, winner of the 2016 Financial Times/McKinsey Business Book of the Year Award and the 2017 George S. Eccles Prize in Economic Writing. His writing has also appeared in the Atlantic and the Financial Times, where he spent two years as a contributing editor.

Mallaby’s interests cover a wide variety of domestic and international issues, including central banks, financial markets, the implications of the rise of newly emerging powers, and the intersection of economics and international relations. His previous book, More Money Than God: Hedge Funds and the Making of a New Elite, was described by New York Times columnist David Brooks as “superb”; it was the recipient of the 2011 Loeb Prize and a New York Times bestseller. His earlier works are The World’s Banker, a portrait of the World Bank under James Wolfensohn that was named as an “Editor’s Choice” by the New York Times; and After Apartheid, which was named by the New York Times as a “Notable Book.” An essay in the Financial Times said of The World’s Banker, “Mallaby’s book may well be the most hilarious depiction of a big organization and its controversial boss since Michael Lewis’s Liar’s Poker.”

Before joining the Washington Post in 1999, Mallaby spent thirteen years with the Economist. While at the Economist, he worked in London, where he wrote about foreign policy and international finance; in Africa, where he covered Nelson Mandela’s release and the collapse of apartheid; and in Japan, where he covered the breakdown of the country’s political and economic consensus. Between 1997 and 1999, Mallaby was the Economist’s Washington bureau chief and wrote the magazine’s weekly Lexington column on American politics and foreign policy. He is a two-time Pulitzer Prize finalist: once for editorials on Darfur and once for a series on economic inequality. In 2015, he helped to found a startup, InFacts.org, a web publication making the fact-based case for Britain to remain in the European Union.

Mallaby was educated at Oxford, graduating in 1986 with a first class degree in modern history. After eighteen years in Washington, DC, he moved to London in 2014, where he lives with his wife, Zanny Minton Beddoes, editor in chief of the Economist.