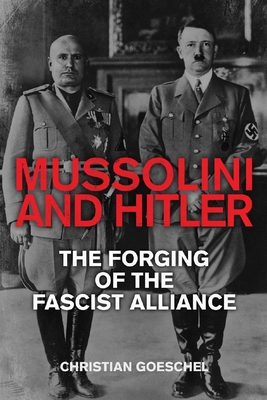 Mussolini and Hitler: The Forging of the Fascist Alliance

A fresh treatment of Fascist Italy and Nazi Germany, revealing the close ties between Mussolini and Hitler and their regimes​

From 1934 until 1944 Mussolini met Hitler numerous times, and the two developed a relationship that deeply affected both countries. While Germany is generally regarded as the senior power, Christian Goeschel demonstrates just how much history has underrepresented Mussolini's influence on his German ally.

In this highly readable book, Goeschel, a scholar of twentieth-century Germany and Italy, revisits all of Mussolini and Hitler's key meetings and asks how these meetings constructed a powerful image of a strong Fascist-Nazi relationship that still resonates with the general public. His portrait of Mussolini draws on sources ranging beyond political history to reveal a leader who, at times, shaped Hitler's decisions and was not the gullible buffoon he's often portrayed as. The first comprehensive study of the Mussolini-Hitler relationship, this book is a must-read for scholars and anyone interested in the history of European fascism, World War II, or political leadership.

Mussolini and Hitler: The Forging of the Fascist Alliance

I am an expert of modern Europe, with a principal focus on Italy and modern Germany. I have a strong interest in the comparative and transnational history of twentieth-century Europe and am increasingly interested in the history of Europe in the world.

I am a Fellow of the Royal Historical Society, and a former Visiting Fellow at the European University Institute in Florence.

At Manchester, I lead the 'Politics, Institutions, and Ideas' research group, together with Prof. Frank Mort. We also lead the Cultures of Diplomacy research network, together with Dr Thomas Tunstall-Allcock.

Outside Manchester, I co-convene the international Rethinking Modern Europe seminar series at the Institute of Historical Research, University of London, and sit on the editorial advisory board of European History Quarterly.

My research focuses on the history of Europe in the twentieth century, with a particular, but not exclusive interest in Germany and Italy. I study the intersection of politics with culture and society in a European and global perspective.