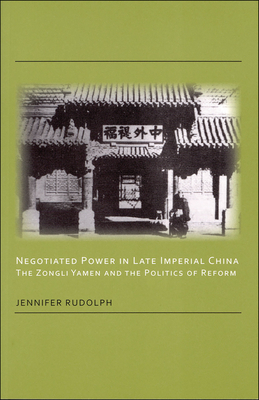 Negotiated Power in Late Imperial China: The Zongli Yamen and the Politics of Reform

Negotiated Power in Late Imperial China: The Zongli Yamen and the Politics of Reformexplores the nature and functioning of reform during the nineteenth century of China's Qing dynasty (1644-1911). By analyzing the bureaucratic modes of management that developed around the creation and evolution of the Zongli Yamen or Foreign Office (1861-1901), the book demonstrates the vitality of not only the Chinese State, but also the institutional traditions of its Manchu rulers. Drawing on precedent and the flexibility of the administrative system in their efforts to manage the conduct of foreign affairs, high Qing ministers transformed opportunities for institutional dynamism into the reality of a functioning central Zongli Yamen with a foreign affairs field administration supporting it in the provinces. In the process, they altered the governmental hierarchy and changed the definition of institutional power in the multi-faceted area of foreign affairs and, more generally, for the Qing bureaucracy. As the most significant example of institutional development in China's critical period of the nineteenth century, the Zongli Yamen's experience serves as valuable background for understanding reform efforts in late imperial China and beyond.
Negotiated Power in Late Imperial China: The Zongli Yamen and the Politics of Reform

Jennifer Rudolph's main area of research is modern Chinese political history.  While her first book dissects institutional change in late imperial China, in her second, she explores identity politics in the Taiwan Strait. In it,

Rudolph explores co-optations of a 17th-century pirate-merchant Zheng Chenggong. Through the centuries, Zheng has lived on, with regimes ruling, or desirous of ruling, Taiwan portraying him as a traitor, Confucian god, Chinese nationalist, Japanese nationalist, and the Moses of Taiwan. Professor Rudolph incorporates her research into her teaching to help students recognize historical accounts as part of ongoing debates about national identity, regionalism, and politics.

Her teaching interests are broad and include the political, social, environmental, and cultural history of China, Taiwan, Japan, and Korea. Rudolph directs WPI's China Hub and is the Director of the Hangzhou IQP Project Center. She and China Hub colleagues have received multiple grants to build a China program at WPI that includes Chinese language courses, project opportunities, a Chinese Studies Minor, and joint programs with Chinese partner institutions.