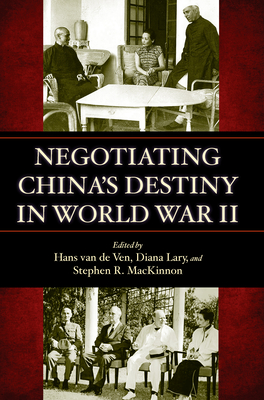 Negotiating China's Destiny explains how China developed from a country that hardly mattered internationally into the important world power it is today. Before World War II, China had suffered through five wars with European powers as well as American imperial policies resulting in economic, military, and political domination. This shifted dramatically during WWII, when alliances needed to be realigned, resulting in the evolution of China's relationships with the USSR, the U.S., Britain, France, India, and Japan. Based on key historical archives, memoirs, and periodicals from across East Asia and the West, this book explains how China was able to become one of the Allies with a seat on the Security Council, thus changing the course of its future.

Breaking with U.S.-centered analyses which stressed the incompetence of Chinese Nationalist diplomacy, Negotiating China's Destiny makes the first sustained use of the diaries of Chiang Kai-shek (which have only become available in the last few years) and who is revealed as instrumental in asserting China's claims at this pivotal point. Negotiating China's Destiny demonstrates that China's concerns were far broader than previously acknowledged and that despite the country's military weakness, it pursued its policy of enhancing its international stature, recovering control over borderlands it had lost to European imperialism in the nineteenth and early twentieth century, and becoming recognized as an important allied power with determination and success.