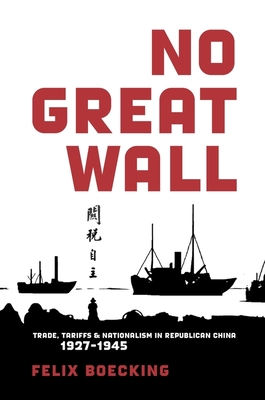 No Great Wall: Trade, Tariffs, and Nationalism in Republican China, 1927-1945

This book, an in-depth study of Nationalist tariff policy, fundamentally challenges the widely accepted idea that the key to the Communist seizure of power in China lay in the incompetence of Chiang Kai-shek's Nationalist government. It argues instead that during the second Sino-Japanese War, China's international trade, the Nationalist government's tariff revenues, and hence its fiscal policy and state-making project all collapsed.

No Great Wall: Trade, Tariffs, and Nationalism in Republican China, 1927-1945

Before coming to Edinburgh in September 2008, I served as a temporary lecturer in Modern East Asian History at Newcastle University from January until June 2008.

During the academic year 2010/2011, I was on leave while holding an An Wang Postdoctoral Fellowship at the Fairbank Center for Chinese Studies at Harvard University and serving as a Visiting Lecturer in the Harvard University History Department. I was elected as a Fellow of the Royal Historical Society (FRHistS) in September 2017, and as a Fellow of the Royal Asiatic Society (FRAS) in January 2018.

During the academic year 2018/2019, I was a Fellow in the History and Public Policy Program and at the Kissinger Institute for China and the United States at the Woodrow Wilson International Center for Scholars in Washington, DC.

My current project, "Economics on the Edge", supported by a Fellowship at the Woodrow Wilson International Center for Scholars in Washington DC, is an intellectual history of economics and economists in the People’s Republic of China from 1949 to the present day.

It combines a discussion of key concepts with intellectual and political biographies of Chinese economists, and demonstrates that modern economics did not enter the PRC only in 1978 as a Western import, as many economists have argued, but that Chinese economics are an intellectual tradition in their own right rather than being a local inflection of a global trend. By studying this tradition, this project is also a contribution to the decentering of Western economics. Furthermore, a study of economic ideas is also always a history of the people practising and living these ideas in a complex, diverse, and continually shifting political environment.

In a socialist country, being an economist was an inherently risky occupation, given the continually changing political environment—as the boundaries of the politically permissible shifted, so did the definition of a good intellectual citizen.

A previous project, “No Great Wall—Trade, Tariffs and Nationalism in Republican China, 1927-1945”, was supported by an An Wang Postdoctoral Fellowship at the Fairbank Center for Chinese Studies at Harvard University during the academic year 2010/2011.

Source: The University of Edinburgh