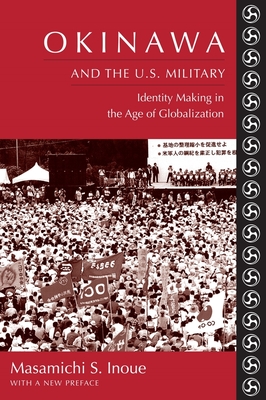 Okinawa and the U.S. Military: Identity Making in the Age of Globalization

In 1995, an Okinawan schoolgirl was brutally raped by several U.S. servicemen. The incident triggered a chain of protests by women's groups, teachers' associations, labor unions, reformist political parties, and various grassroots organizations across Okinawa prefecture. Reaction to the crime culminated in a rally attended by some 85,000 people, including business leaders and conservative politicians who had seldom raised their voices against the U.S. military presence.

Using this event as a point of reference, Inoue explores how Okinawans began to regard themselves less as a group of uniformly poor and oppressed people and more as a confident, diverse, middle-class citizenry embracing the ideals of democracy, human rights, and women's equality. As this identity of resistance has grown, however, the Japanese government has simultaneously worked to subvert it, pressuring Okinawans to support a continued U.S. presence. Inoue traces these developments as well, revealing the ways in which Tokyo has assisted the United States in implementing a system of governance that continues to expand through the full participation and cooperation of residents.

Inoue deftly connects local social concerns with the larger political processes of the Japanese nation and the global strategies of the United States. He critically engages social-movement literature along with postmodern/structural/colonial discourses and popular currents and themes in Okinawan and Japanese studies. Rich in historical and ethnographical detail, this volume is a nuanced portrait of the impact of Japanese colonialism, World War II, and U.S. military bases on the formation of contemporary Okinawan identity.

Okinawa and the U.S. Military: Identity Making in the Age of Globalization

Since the mid-1990s, I have been conducting a series of anthropological and cultural analyses of the U.S. military base issues in Okinawa. Currently, I aim to complete a second book on this subject. In addition, I have conducted fieldwork with the campus police to examine issues of security in the increasingly globalized environment of post-9.11 American society. “Border-crossing” as a form of intellectual enterprise mediates and unites these projects, manifesting itself as I write Japan (including Okinawa) from a global perspective on the one hand and explore global America as a Japanese intellectual on the other.