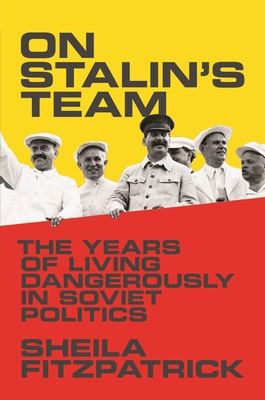 On Stalin's Team: The Years of Living Dangerously in Soviet Politics

Stalin was the unchallenged dictator of the Soviet Union for so long that most historians have dismissed the officials surrounding him as mere yes-men and political window dressing. On Stalin's Team overturns this view, revealing that behind Stalin was a group of loyal men who formed a remarkably effective team with him from the late 1920s until his death in 1953. Drawing on extensive original research, Sheila Fitzpatrick provides the first in-depth account of this inner circle and their families. She vividly describes how these dedicated comrades-in-arms not only worked closely with Stalin, but also constituted his social circle. Stalin's team included the wily security chief Beria; Andreev, who traveled to provincial purges while listening to Beethoven on a portable gramophone; and Khrushchev, who finally disbanded the team four years after Stalin's death. Taking readers from the cataclysms of the Great Purges and World War II to the paranoia of Stalin's final years, On Stalin's Team paints an entirely new picture of Stalin within his milieu--one that transforms our understanding of how the Soviet Union was ruled during much of its existence.

On Stalin's Team: The Years of Living Dangerously in Soviet Politics

Sheila Fitzpatrick is Professor of History at the University of Sydney and Distinguished Service Professor Emerita of the University of Chicago. Her books include Everyday Stalinism (2000), Tear off the Masks! Identity and Imposture in Twentieth-Century Russia (2005), My Father’s Daughter (2010) and a memoir of Moscow in the 1960s, A Spy in the Archives (2013.

Her most recent monograph, On Stalin’s Team: The Years of Living Dangerously in Soviet Politics, was published by Princeton University Press and Melbourne University Press in September 2015 and won the Prime Minister's Prize for Non-Fiction in Australia in 2016.

She is currently working on a project on displaced persons from the Soviet Union after the Second World War and the issue of repatriation. Her book on the experiences of Michael and Olga Danos as DPs in Germany is now finished and will be published as Mischka`s War: A  European Odyssey of the 1940`s by Melbourne University Press and I.B.Tauris in London in July of this year.