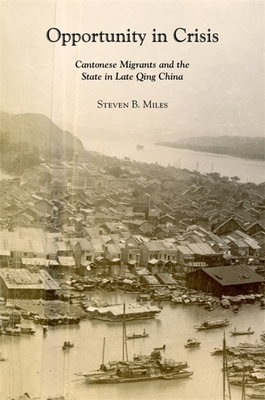 Opportunity in Crisis: Cantonese Migrants and the State in Late Qing China

Opportunity in Crisis explores the history of late Qing Cantonese migration along the West River basin during war and reconstruction and the impact of those developments on the relationship between state and local elites on the Guangxi frontier. By situating Cantonese upriver and overseas migration within the same framework, Steven Miles reconceives the late Qing as an age of Cantonese diasporic expansion rather than one of state decline.

The book opens with crisis: rising levels of violence targeting Cantonese riverine commerce, much of it fomented by a geographically mobile Cantonese underclass. Miles then narrates the ensuing history of a Cantonese rebel regime established in Guangxi in the wake of the Taiping uprising. Subsequent chapters discuss opportunities created by this crisis and its aftermath and demonstrate important continuities and changes across the mid-century divide. With the reassertion of Qing control, Cantonese commercial networks in Guangxi expanded dramatically and became an increasingly important source of state revenue. Through its reliance on Hunanese and Cantonese to reconquer Guangxi, the Qing state allowed these diasporic cohorts more flexibility in colonizing the provincial administration and examination apparatus, helping to recreate a single polity on the eve of China's transition from empire to nation-state.

Opportunity in Crisis: Cantonese Migrants and the State in Late Qing China

A common theme in Steven Miles' research projects has been the physical movement of people across space, from the early nineteenth-century literatus Xie Lansheng’s peregrinations in urban Guangzhou to Cantonese merchants trading on the Guangxi-Vietnam border, to global Chinese migration.

Miles' first book, The Sea of Learning (2006), explores the in-migrating, socially ascendant, urban elite in the southern Chinese city of Guangzhou (Canton) who embraced new trends in literature and scholarship promoted at the city’s fashionable academy, the Xuehaitang.

His second book, Upriver Journeys: Diaspora and Empire in Southern China, 1570-1850, traces a range of “diasporic” activities – from serving as officials, to acquiring land and registering as students in upriver schools in order to sit for less competitive civil service examinations there, to conducting trade, to obtaining wives or concubines, to touring – that Cantonese men pursued upstream along the West River basin.  A recently completed monograph, Opportunity in Crisis, explores the history of migration during the breakdown of the Qing order in southern China in the mid-nineteenth century and the reconsolidation of Qing control in the late-nineteenth century.  Set in Guangxi, it tells the little-known story of the mid-century wars between Triads and river pirates, on one hand, and Qing loyalists and carpetbaggers, on the other.

Both of these books are supported by "Cantonese Migrant Networks", a database of epigraphical materials from the West River basin.

Chinese Diasporas:  A Social History of Global Migration, forthcoming from Cambridge University Press, is a general history of internal and external Chinese migration from the sixteenth century to the present day.

For his next project, Miles plans to return to urban history while retaining his interest in the movement of the people across space.  Under the theme of "seasonality and cities", he will explore the rhythm of urban life in nineteenth-century China, the many interconnected ways in which political, economic, leisure, and ritual activities were patterned according to seasons.