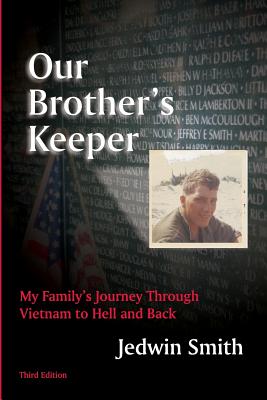 Our Brother's Keeper: My Family's Journey Through Vietnam to Hell and Back

Our Brother's Keeper is the story of all wars. While it is an unvarnished depiction of combat and its somber compilation of battlefield casualties, more importantly it is also the story of war's staggering list of collateral damage-the family and friends of the slain.

Since 1941, three generations have been seared by five catastrophic wars; for the present generation, it is Iraq and Afghanistan. But for author Jedwin Smith, his parents and his brothers and sisters, it is the haunting specter of Vietnam that will never be forgotten. Seemingly on a whim, Jeffrey Earl Smith, the author's younger brother, put aside his anti-war sentiments and joined the Marines in July 1967.

Sent to Vietnam four months later, his death during a Viet Cong ambush in March 1968 was the catalyst that finally ended his parents' turbulent marriage and created a lost generation of Smith siblings.

For the author, himself a former Marine, it was the beginning of a 32-year odyssey to track down the individual who killed his brother and extract revenge-a quest that takes the author across the country in search of the Marines who were at Jeff's side on that horrific day three decades earlier, and ends in Vietnam at the village of Mai Xa Thi, where the author confronts Duong Tu Anh, the former VC commander responsible for the attack that killed Jeff.

This encounter is chilling, extraordinary, and life-changing.

Our Brother's Keeper is more than a moving and beautifully written family saga of the Vietnam War and its bitter and ongoing aftermath, it is also an inspiring personal tale of loss and healing, anger and forgiveness, self-discovery-and the transcendent power of love.

Our Brother's Keeper: My Family's Journey Through Vietnam to Hell and Back