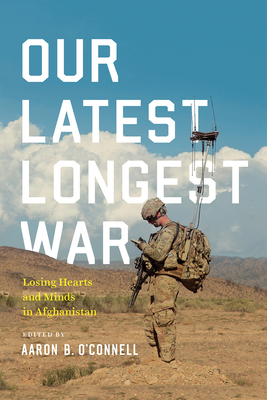 Our Latest Longest War: Losing Hearts and Minds in Afghanistan

The first rule of warfare is to know one's enemy. The second is to know thyself. More than fifteen years and three quarters of a trillion dollars after the US invasion of Afghanistan, it's clear that the United States followed neither rule well. America's goals in Afghanistan were lofty to begin with: dismantle al Qaeda, remove the Taliban from power, remake the country into a democracy. But not only did the mission come completely unmoored from reality, the United States wasted billions of dollars, and thousands of lives were lost. Our Latest Longest War is a chronicle of how, why, and in what ways the war in Afghanistan failed. Edited by historian and Marine lieutenant colonel Aaron B. O'Connell, the essays collected here represent nine different perspectives on the war--all from veterans of the conflict, both American and Afghan. Together, they paint a picture of a war in which problems of culture and an unbridgeable rural-urban divide derailed nearly every field of endeavor. The authors also draw troubling parallels to the Vietnam War, arguing that deep-running ideological currents in American life explain why the US government has repeatedly used armed nation-building to try to transform failing states into modern, liberal democracies. In Afghanistan, as in Vietnam, this created a dramatic mismatch of means and ends that neither money, technology, nor the force of arms could overcome. The war in Afghanistan has been the longest in US history, and in many ways, the most confounding. Few who fought in it think it has been worthwhile. These are difficult topics for any American or Afghan to consider, especially those who lost friends or family in it. This sobering history--written by the very people who have been fighting the war--is impossible to ignore.
Our Latest Longest War: Losing Hearts and Minds in Afghanistan