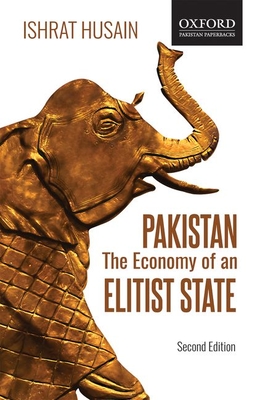 Pakistan: The Economy of an Elitist State (2e)

This insightful analysis into the prevailing economic situation in Pakistan has three distinguishing features. It is an exhaustive, analytical history of economic development in Pakistan during the last ?fty years; it provides an explanation of Pakistans economic performance in the political context, and compares it with other South Asian countries and with East Asia; it outlines for Pakistan an agenda of economic and social reforms based on a model of shared growth to see the country into the twenty-?rst century. The main thrust of the book is that the respective roles of the state and the market have been reversed in the case of Pakistan, with the result that the bene?ts are reaped by the elite class only. This small minority continues to enjoy the unjust accumulation of wealth in the midst of widespread poverty and squalor. The author establishes that such a situation is socially and economically not sustainable.
Pakistan: The Economy of an Elitist State (2e)

Dr. Ishrat Husain is currently Advisor to the Prime Minister on Institutional Reforms and Austerity with the status of Federal Minister. During 2016-17 he was Public Policy Fellow at the Woodrow Wilson Center in Washington DC. During this tenure he produced his latest book “Governing the ungovernable’” which was published by Oxford University Press.

He is HEC National Distinguished Professor, Professor Emeritus and Chairman Centre for Excellence in Islamic Finance at the Institute of Business Administration, (IBA) Karachi. He had earlier served as Dean and Director IBA - the oldest graduate business school in Pakistan (established in 1955) between 2008 and 2016. During his term of office he was actively engaged in the transformation of the Institute to become one of the leading Global Business schools. He served as the Chairman, National Commission for Government Reforms for two years from 2006 to 2008 with the status of Federal Minister reporting directly to the President and Prime Minister of Pakistan. The Commission produced a two volume report on governance reforms in Pakistan.

He was appointed the Governor of Pakistan’s Central Bank in December 1999. During the next six years, he implemented a major program of restructuring of the Central Bank and steered the reforms of the banking sector. As a member of the economic management team of the Government, he played a key role in the impressive economic turnaround of Pakistan. In recognition of his meritorious services he was conferred the prestigious award of “Hilal-e-Imtiaz” by the President of Pakistan in 2003.

The Banker Magazine of London declared him as the Central Bank Governor of the year for Asia in 2005. He received the Asian Banker Lifetime achievement award in 2006. The President of Pakistan conferred upon him the highest civilian award of Nishan e Imtiaz in 2016 for his outstanding public service.

Dr. Husain had a distinguished career at the World Bank for over two decades 1979-1999. Among the key positions he held at the Bank were Resident Representative to Nigeria, head of the Bank’s Debt and International Finance Division, Chief Economist for Africa between 1991-94 and later as Chief Economist for East Asia and Pacific Region that included China. He became the Bank’s Director Poverty and Social Department and in 1997 he was named the Country Director for Central Asian Republics.

Since his retirement as the Governor he has been actively involved in many national and international assignments. During 2005-06 he was appointed by the Board of IMF as a member of a three person panel to evaluate the IEO. He was a member of the Mahathir Commission 2020 vision for the Islamic Development Bank (IDB).

He also advised the IDB for creating its poverty reduction fund. He was appointed by the Board of Asian Development Bank to a two member independent panel to restructure the Accountability Mechanism. He also served on the Middle East Advisory Group of the IMF, Regional Advisory Group of UNDP, the President Advisory Council of IDB and was Chairman World Economic Forum Global Advisory Council on Pakistan until June 2014.

During 2009-10 he was appointed by the Government of Pakistan to chair the Pay and Pension Commission. Between 2011-14 he served as an independent Director on the Board of Benazir Income Support Programme (BISP)-- the largest Social safety net and conditional cash transfer program targeted at the poor households of Pakistan. He was reappointed to the Board of BISP in 2017. He served as Convener, Economic Advisory Council, Ministry of Finance until 2017 and Member, Advisory Council to the Minister of Planning, Development and Reforms. He was also one of the two non official members of the Monetary and Fiscal Coordination Board headed by the Minister of Finance until August 2018.

Mr. Husain has maintained an active scholarly interest in development issues. He has authored two dozen books and monographs and contributed more than 40 articles in refereed journals and 34 chapters in books. His book “Pakistan: The Economy of the Elitist State” published by Oxford University Press is widely read in Pakistan and outside. His latest research and writings are focused on CPEC and his book “CPEC and Pakistani economy” has been published by the Centre for Excellence on CPEC in May 2018. He is regularly invited as a speaker to international conferences and seminars and has attended more than 150 such events all over the world since 2006. He has chaired or served on the Boards of several research institutes, philanthropic and cultural organizations.

Ishrat Husain obtained Master’s degree in Development Economics from Williams College and Doctorate in Economics from Boston University in 1978. He is a graduate of Executive Development program jointly sponsored by Harvard, Stanford and INSEAD