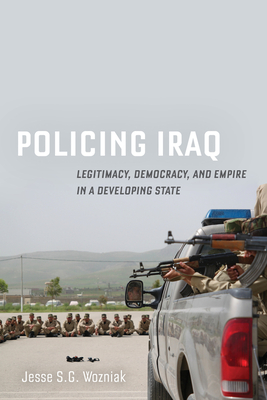 Policing Iraq: Legitimacy, Democracy, and Empire in a Developing State

Policing Iraq chronicles the efforts of the Kurdistan Regional Government of Iraq to rebuild their police force and criminal justice system in the wake of the US invasion. Jesse S. G. Wozniak conducted ethnographic research during multiple stays in Iraqi Kurdistan, observing such signpost moments as the Arab Spring, the official withdrawal of coalition forces, the rise of the Islamic State, and the return of US forces. By investigating the day-to-day reality of reconstructing a police force during active hostilities, Wozniak demonstrates how police are integral to the modern state's ability to effectively rule and how the failure to recognize this directly contributed to the destabilization of Iraq and the rise of the Islamic State. The reconstruction process ignored established practices and scientific knowledge, instead opting to create a facade of legitimacy masking a police force characterized by low pay, poor recruits, and a training regimen wholly unsuited to a constitutional democracy. Ultimately, Wozniak argues, the United States never intended to build a democratic state but rather to develop a dependent client to serve its neoimperial interests.
Policing Iraq: Legitimacy, Democracy, and Empire in a Developing State

Hello! I’m an Associate Professor of Sociology at West Virginia University, where I’ve been since Spring 2013 after receiving my Ph.D. in Sociology from the University of Minnesota.

My research centers mainly on policing and social control, with an emphasis on how state power intersects with neoliberalism and neo-imperialism. My work has appeared in such journals as The British Journal of Criminology, Punishment and Society, Social Science Quarterly, and The Journal of Peace Research, as well as having been featured on Buzzfeed News, Pittsburgh City Pages, and Top of the Mind with Julie Rosen.

My first book, Policing Iraq: Legitimacy, Democracy, and Empire in a Developing State (University of California Press), is now in print! Click here to read more about it, or just go ahead and buy it from UC Press, Powell’s, Indie Bound, Book Shop, or your favorite local bookstore. International policing expert Dr. Pete Kraska called it a “rare gem” and who are you to argue with that?

In the Spring of 2021, I had the great honor of serving on the Steering Committee of the Coalition to Reimagine Public Safety, a joint venture of the Alliance for Police Accountability and 1Hood Media. The Coalition brought together a wide range of community members and organizations of those who have been impacted by police violence and who are working on building safe and secure communities throughout Pittsburgh and Allegheny County. Click here to read our Community Vision for Lasting Health and Safety, of which I was the lead author.

If you have any questions about my research, publications, or the courses I teach, please explore the links on the left side of the page, give me a shout , or slide into my dms @jessesgwozniak