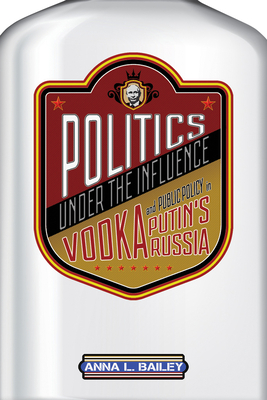 Politics Under the Influence: Vodka and Public Policy in Putin's Russia

You know just how serious a problem alcoholism has become for our country. Frankly speaking, it has taken on the proportions of a national disaster. So spoke Russian President Dmitry Medvedev in 2009 as the government launched its latest anti-alcohol campaign. Challenging the standard narrative of top-down implementation of policy, Anna Bailey's Politics under the Influence breaks new ground in the analysis of Russian alcoholism and the politics of the Putin regime.

The state is supposed to make policy in the national interest, to preserve the nation's health against the ravages inflicted by widespread alcohol abuse. In fact, Bailey shows, the Russian state is deeply divided, and policy is commonly a result of the competitive interactions of stakeholders with vested interests. Politics under the Influence turns a spotlight on the powerful vodka industry whose ties to Putin's political elite have grown in influence since 2009. She details how that lobby has used the anti-alcohol campaign as a way to reduce the competitiveness of its main rival--the multinational beer industry. Drawing on a wide range of sources including fieldwork interviews, government documents, media articles, and opinion polls, Bailey reveals the many ambivalences, informal practices, and paradoxes in contemporary Russian politics. Politics under the Influence exhibits the kleptocratic nature of the Putin regime; as a result, analysis of vested interests and informal sources of power is essential to understanding public policy in contemporary Russia. This book will be an invaluable resource for anyone working on policy and corruption in Putin's Russia.

Politics Under the Influence: Vodka and Public Policy in Putin's Russia

She is expert on Russian alcohol policy and markets and holds PhD in political science and government from University College London. U.K.