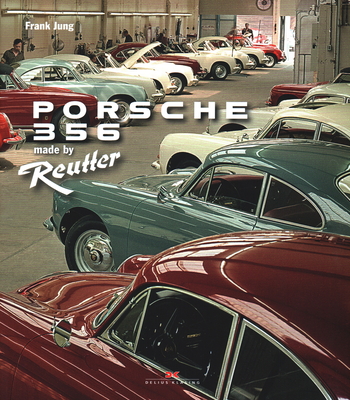 Porsche 356: Made by Reutter

- Together the companies Reutter and Porsche made automobile history. Author Frank Jung, Albert Reutter's great-grandson, embarked on detailed research on this subject. Through personal contact with former staff and contemporary witnesses he discovered unique pictures and texts that were used largely for this book- On the basis of historical photos and previously unpublished documents, the models and events are presented chronologically until 1964: starting in the 1930s with the cooperative work on Volkswagen predecessors and prototypes, the focus is on the companies' cooperation and the development of their factory buildings, as well as on the production of the Porsche 356 bodywork since 1949- Descriptions of the work on prototypes and special vehicles complete this comprehensive monographThe long and successful cooperation between Porsche and the Stuttgarter Karosseriewerk Reutter & Co. GmbH was, right from its beginning, more than just a marriage of convenience. It was based on mutual sympathy of two unique companies within the automotive industry. In 1931 the Reutter coachwork company, founded in 1906, started building prototypes of what would later be known as Volkswagen on behalf of the Porsche engineering office. In 1949 Porsche gave the order to Reutter to produce 500 bodies for the Porsche sports car, and around Easter time 1950 the first Porsche 356 ever to be constructed in Germany was finished in Reutter's factory I. Porsche bought ground from Reutter within the plot of its factory II in order to build a new construction site for manufacturing motors. At the same time Reutter moved the complete bodywork to factory II in Zuffenhausen and from that moment most of the legendary Porsche 356 were manufactured in intensive cooperation and side by side. Besides those vehicles made by hand in serial-production Porsche 356 presents many prototypes and special cars made for Porsche up to the point of collective evolution of the later called Porsche type 911. The book's focus is on the description of the development of a Porsche 356-body, colorfully illustrated and detailed as never before. Much of the material used was taken from the Reutter-family archive. Previously unpublished documents and pictures were found in several institutional and private archives, especially the archive of Porsche itself.
Porsche 356: Made by Reutter