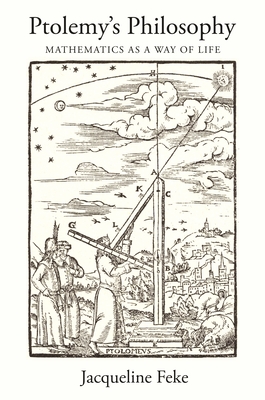 Ptolemy's Philosophy: Mathematics as a Way of Life

The Greco-Roman mathematician Claudius Ptolemy is one of the most significant figures in the history of science. He is remembered today for his astronomy, but his philosophy is almost entirely lost to history. This groundbreaking book is the first to reconstruct Ptolemy's general philosophical system--including his metaphysics, epistemology, and ethics--and to explore its relationship to astronomy, harmonics, element theory, astrology, cosmology, psychology, and theology. In this stimulating intellectual history, Jacqueline Feke uncovers references to a complex and sophisticated philosophical agenda scattered among Ptolemy's technical studies in the physical and mathematical sciences. She shows how he developed a philosophy that was radical and even subversive, appropriating ideas and turning them against the very philosophers from whom he drew influence. Feke reveals how Ptolemy's unique system is at once a critique of prevailing philosophical trends and a conception of the world in which mathematics reigns supreme. A compelling work of scholarship, Ptolemy's Philosophy demonstrates how Ptolemy situated mathematics at the very foundation of all philosophy--theoretical and practical--and advanced the mathematical way of life as the true path to human perfection.
Ptolemy's Philosophy: Mathematics as a Way of Life

My research examines the history, philosophy, and rhetoric of the ancient Greek physical and mathematical sciences, with a focus on the philosophical systems of ancient Greek mathematicians. My book, Ptolemy's Philosophy: Mathematics as a Way of Life, was shortlisted for the British Society for the History of Science's Pickstone Prize.