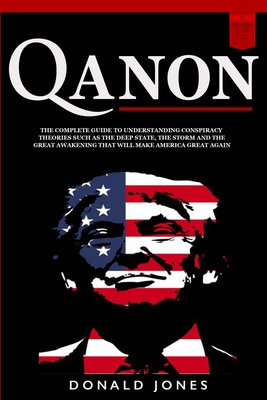 Qanon: The Complete Guide To Understanding Conspiracy Theories such as The Deep State, The Storm and The Great Awakening That Will Make America Great Again

Have you ever heard about conspiracy theories? Do you want to learn more about them? If yes, then keep reading!

Some of the popular conspiracy theories include the fake walking on the moon, assassination and deaths of politicians, famous TV personalities, and famous musicians. There are groups of people who develop these kinds of theories and are backed with facts and data. One of the largest and is currently getting an audience and attention is QAnon.

QAnon is a conspiracy theory about what they call the Deep State. They are an anonymous, organized community of believers who embrace unsubstantiated beliefs. They are waiting for two significant events: The Storm and The Great Awakening. They post about conspiracy theories regarding world news and issues. The first post about QAnon came from an unidentified person who the believers call Q. Many believe that Q is a high ranking official in the Government of the United States. It is also believed that Q is acquainted with President Donald Trump. It is also thought that the main Antagonist of QAnon is Barack Obama, who is a democrat.

Throughout human history, a recurring theme has emerged repeatedly; when human beings lack an explanation, they will make one up. Hundreds of myths exist to explain scientific phenomena, from why there are stars in the sky to why the human body gets sick.

This book covers the following topics:

This book contains everything you need to know generally about conspiracy theories and specifically about the now extremely popular QAnon movement.

Qanon: The Complete Guide To Understanding Conspiracy Theories such as The Deep State, The Storm and The Great Awakening That Will Make America Great Again