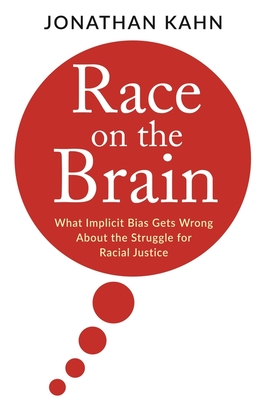 Race on the Brain: What Implicit Bias Gets Wrong about the Struggle for Racial Justice

Of the many obstacles to racial justice in America, none has received more recent attention than the one that lurks in our subconscious. As social movements and policing scandals have shown how far from being postracial we are, the concept of implicit bias has taken center stage in the national conversation about race. Millions of Americans have taken online tests purporting to show the deep, invisible roots of their own prejudice. A recent Oxford study that claims to have found a drug that reduces implicit bias is only the starkest example of a pervasive trend. But what do we risk when we seek the simplicity of a technological diagnosis--and solution--for racism? What do we miss when we locate racism in our biology and our brains rather than in our history and our social practices?

In Race on the Brain, Jonathan Kahn argues that implicit bias has grown into a master narrative of race relations--one with profound, if unintended, negative consequences for law, science, and society. He emphasizes its limitations, arguing that while useful as a tool to understand particular types of behavior, it is only one among several tools available to policy makers. An uncritical embrace of implicit bias, to the exclusion of power relations and structural racism, undermines wider civic responsibility for addressing the problem by turning it over to experts. Technological interventions, including many tests for implicit bias, are premised on a color-blind ideal and run the risk of erasing history, denying present reality, and obscuring accountability. Kahn recognizes the significance of implicit social cognition but cautions against seeing it as a panacea for addressing America's longstanding racial problems. A bracing corrective to what has become a common-sense understanding of the power of prejudice, Race on the Brain challenges us all to engage more thoughtfully and more democratically in the difficult task of promoting racial justice.

Race on the Brain: What Implicit Bias Gets Wrong about the Struggle for Racial Justice

Professor Kahn, a leading authority on biotechnology’s implications for our ideas of identity, rights and citizenship, with a particular focus on race and justice, holds a joint appointment with the School of Law and the Department of Biology in the College of Science. He also plays a key role in the law school’s Center for Health Policy and Law and its Center for Law, Information and Creativity (CLIC).

In his second book, Race in a Bottle: The Story of BiDil and Racialized Medicine in a Post-Genomic Age (Columbia University Press), Professor Kahn examines the legal and commercial imperatives driving the expanding role of race in biomedicine, even as scientific advances in genomics could render the issue irrelevant. The book was awarded an Honorable Mention for the 2013 Best Book Award by the Race, Ethnicity, and Politics Section of the American Political Science Association. His first book, Budgeting Democracy: State-Building and Citizenship in America, 1890-1928, was published by Cornell University Press.

Professor Kahn has received two grants from the National Human Genome Research Institute’s (NHGRI) Ethical, Legal and Social Implications (ELSI) Research Program to support projects exploring the ethical and legal ramifications of the increasing use of racial and ethnic categories in the context of gene patenting and drug development. His articles have been published in a wide array of leading journals, ranging from the Yale Journal of Health Policy, Law, and Ethics, Iowa Law Review and the Stanford Law & Policy Review to Health Affairs, The American Journal of Bioethics, the American Journal of Public Health, Science and Nature Genetics.