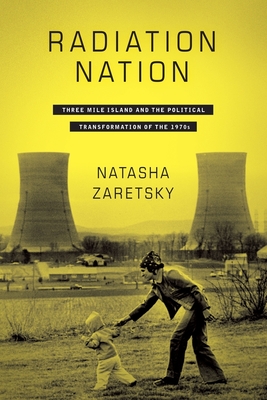 Radiation Nation: Three Mile Island and the Political Transformation of the 1970s

On March 28, 1979, the worst nuclear reactor accident in U.S. history occurred at the Three Mile Island power plant in Central Pennsylvania. Radiation Nation tells the story of what happened that day and in the months and years that followed, as local residents tried to make sense of the emergency. The near-meltdown occurred at a pivotal moment when the New Deal coalition was unraveling, trust in government was eroding, conservatives were consolidating their power, and the political left was becoming marginalized. Using the accident to explore this turning point, Natasha Zaretsky provides a fresh interpretation of the era by disclosing how atomic and ecological imaginaries shaped the conservative ascendancy.

Drawing on the testimony of the men and women who lived in the shadow of the reactor, Radiation Nation shows that the region's citizens, especially its mothers, grew convinced that they had sustained radiological injuries that threatened their reproductive futures. Taking inspiration from the antiwar, environmental, and feminist movements, women at Three Mile Island crafted a homegrown ecological politics that wove together concerns over radiological threats to the body, the struggle over abortion and reproductive rights, and eroding trust in authority. This politics was shaped above all by what Zaretsky calls biotic nationalism, a new body-centered nationalism that imagined the nation as a living, mortal being and portrayed sickened Americans as evidence of betrayal. The first cultural history of the accident, Radiation Nation reveals the surprising ecological dimensions of post-Vietnam conservatism while showing how growing anxieties surrounding bodily illness infused the political realignment of the 1970s in ways that blurred any easy distinction between left and right.

Radiation Nation: Three Mile Island and the Political Transformation of the 1970s

I was born in San Francisco in 1970, and my parents were activists in the antiwar, New Left, and feminist movements of the era. Many of the questions that I pose as a historian emerged out of the contradictions that shaped my childhood. I came of age in a family, community, and city that embraced the social and cultural transformations of the 1960s. But as I grew up, I watched as the political culture of the United States became polarized and as new forms of social and economic inequality took hold.

I arrived at the University of Alabama in the Fall of 2019 after almost two decades of teaching at Southern Illinois University-Carbondale. Over the course of my teaching career, I have taught courses in contemporary US history, US and the World, the histories of women, gender, and the family, modern lesbian and gay history, and American Studies. Many of my students come from rural, conservative backgrounds and have arrived at the university against considerable odds. Their life stories and perspectives have challenged me to develop more nuanced understandings of contemporary liberalism and conservatism that move beyond accounts of polarization and the culture wars.

I live in Homewood with my husband, two children, and a mutt named Ruthie.

Source: The University of Alabama at Birmingham