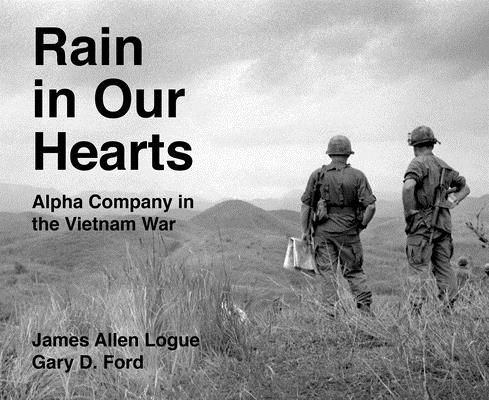 Rain in Our Hearts: Alpha Company in the Vietnam War

With words and photographs, Rain in Our Hearts takes readers into Alpha Company, 4th Battalion, 31st Infantry, 196th LIB, Americal Division in 1969-1970. Jim Logue, a professional photographer, was drafted and served as an infantryman; he also carried a camera. In order to take my mind off the war, he would say, I took pictures. Logue's photos showcase the daily lives of infantrymen: setting up a night laager, chatting with local children, making supply drops, and humping rucksacks miles each day in search of the enemy. His camera records the individual experiences and daily lives of the men who fought the war. Accompanying Logue's over 100 photographs is the narrative written by Gary D. Ford. Wanting to reconstruct the story of Alpha Company during the time in which Logue served, Ford and Logue trekked across America to meet with and interview every surviving member whom they could locate and contact. Each chapter of Rain in Our Hearts focuses on the viewpoint and life of one member of Alpha Company, including aspects of life before and after Vietnam. The story of the Company's movements and missions over the year unfold as readers are introduced to one soldier at a time. Taken together, Rain in Our Hearts offers readers a window into the words and sights of Alpha Company's Vietnam War.
Rain in Our Hearts: Alpha Company in the Vietnam War

James Allen Logue was drafted during college and served in Vietnam as an infantryman. Along with his rifle, Logue carried a camera. He took pictures throughout his deployment, most notably during the savage fighting near Hiep Duc on May 1970.

Born in Camden, New Jersey to a World War II navy veteran and coal salesman for Reading Anthracite Company, and Jacqueline Joyce Allen. Jim grew up in Clayton, New Jersey, a town of about 7,000 and "a good place to grow up. "I knew everybody's brothers and sisters; knew everybody's street. You rode your bike everywhere," he recalls. His father became mayor in the 1950s while his mother worked as a public health nurse.

Jim became an Eagle Scout and developed a love of photography. He shot weddings, high school events, such as football games, for the local paper, carrying his Mamiya twin-lens reflex camera to school every day. During his senior year in high school he worked for Pitman Camera Center. After graduating in 1965 he entered Brooks Institute of Photography in Santa Barbara, California. There, for three years, he honed skills with a view camera as well as a 35 mm camera. At home on vacation one summer he photographed a meeting between President Lyndon B. Johnson and Premier Alexei Kosygin of the Soviet Union. In his college senior year he and his roommate produced a movie as a project that won an award in the International Photographic Society of America.

There also he dated Debbie Dunn, whose photograph he would carry in his helmet liner in Vietnam. Jim graduated from in 1968 and came home where he worked in a camera store. He also attended classes at two community colleges and completed a Dale Carnegie course. Jim was drafted and on May 19, 1969 inducted into service. After basic training at Fort Dix, New Jersey, he completed Advanced Individual Training in infantry at Fort Lewis, Washington. He arrived in Vietnam on October 6, 1969 and he was assigned to Company A, 4th Battalion, 31st Infantry, headquartered on LZ West. He began the regimen of patrolling and setting ambushes, while serving as a radio telephone operator. It was the monsoon season, and he recalls his feet were wet for the first six months.

Meanwhile he was taking photographs, both black-and-white and color with film his father sent him. "I was really conservative. I didn't shoot everything. Every shot basically had to count," he recalls. Jim sent his father his rolls of film. His father processed them and sent Jim proof sheets. His buddies would order prints and his father would send the photographs to the person the soldier requested, like a mother or wife. "I'm a capitalist fighting the communists," remarks Jim of his photography in Vietnam. He sent his father a map of the area his company patrolled, so he could send instructions as to where the photographs were taken. Jim fought in the battle of Hiep Duc Valley, beginning 10 May 1970. He was wounded in his neck in a mortar attack, for which he received a Purple Heart.

For his company, the battle lasted from 10 to 17 May when the battalion walked back up to LZ West. On 6 June, the unit fought another battle at the base of LZ West. After his year in Vietnam he completed the rest of his tour of duty at Aberdeen Proving Ground in Aberdeen, Maryland, where he was an MP and worked in the motion picture division. He was discharged on May 19, 1971. He worked at Camden Bottle Factory, then opened a portrait studio and began a school picture company in Massachusetts. On May 30, 1972 he married Deanna Balm.

They would have two children. On July 20, 1981 he married Jennie Delaney. They would have two children. Today Jim has three grandchildren. In 1995, he moved to Osteen, Florida and worked with Nelson Jones, then became a coordinator in a welfare-to-work program at Daytona Beach Community College. In 2010 he published A Collection of Images from 1969 to 1970: Vietnam, Hiep Duc and LZ West, a compilation of his war-time photographs.