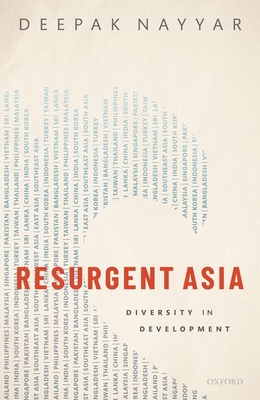 Gunnar Myrdal published his magnum opus Asian Drama, in 1968, to conclude that Asia's development prospects were gloomy. Since then, contrary to Myrdal's expectations Asia has been transformed beyond recognition, the development of nations and living standards of people revolutionized. These transformations have been uneven across countries and unequal among people. Yet, Asia's economic progress in this short timespan has been remarkable and almost unprecedented in history.

Resurgent Asia provides an analytical narrative of Asia's incredible economic development, situated in the wider context of historical, political, and social factors. It also provides an economic analysis of underlying factors that assisted Asia's growth and the critical issues in the process of development.

He was educated at St. Stephen’s College and the Delhi School of Economics, University of Delhi. Thereafter, as a Rhodes Scholar, he went on to study at Balliol College, University of Oxford, where he obtained a B. Phil and a D. Phil in Economics.

Deepak Nayyar is an Honorary Fellow of Balliol College, Oxford. He is a Distinguished Fellow of the Centre for the Study of Developing Societies, Delhi. And he is a Distinguished Professor at the Council for Social Development, New Delhi. He is Chairman of the Sameeksha Trust, which publishes Economic and Political Weekly.

He has served as a member of many commissions, committees and boards: both national and international. He has been a member of the National Knowledge Commission in India. He has been a Member of the World Commission on the Social Dimension of Globalization. He was a Director on the Boards of State Trading Corporation of India, State Bank of India, Export-Import Bank of India, Maruti Udyog, Steel Authority of India Limited, ICRA, and Oil and Natural Gas Corporation.

His research interests are primarily in the areas of international economics, macroeconomics, development economics and economic history. He has published papers and books on a wide range of subjects, including economic growth, macroeconomic theory, macro policies, macroeconomic stabilization, structural adjustment, trade theory, trade policies, industrialization strategies, industrial policy, economic liberalization, human development, employment, international migration, multilateral trading system, globalization, and the world economy. In addition, he has written extensively on economic development in India. His most recent work is on the remarkable economic transformation, and rise, of Asia during the past fifty years.