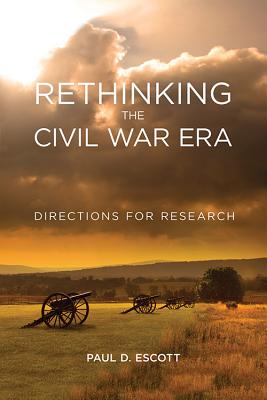 Arguably, no event since the American Revolution has had a greater impact on US history than the Civil War. This devastating and formative conflict occupies a permanent place in the nation's psyche and continues to shape race relations, economic development, and regional politics. Naturally, an event of such significance has attracted much attention from historians, and tens of thousands of books have been published on the subject. Despite this breadth of study, new perspectives and tools are opening up fresh avenues of inquiry into this seminal era.

In this timely and thoughtful book, Paul D. Escott surveys the current state of Civil War studies and explores the latest developments in research and interpretation. He focuses on specific issues where promising work is yet to be done, highlighting subjects such as the deep roots of the war, the role of African Americans, and environmental history, among others. He also identifies digital tools which have only recently become available and which allow researchers to take advantage of information in ways that were never before possible. Rethinking the Civil War Era is poised to guide young historians in much the way that James M. McPherson and William J. Cooper Jr.'s Writing the Civil War: The Quest to Understand did for a previous generation. Escott eloquently charts new ways forward for scholars, offering ideas, questions, and challenges. His work will not only illuminate emerging research but will also provide inspiration for future research in a field that continues to adapt and change.