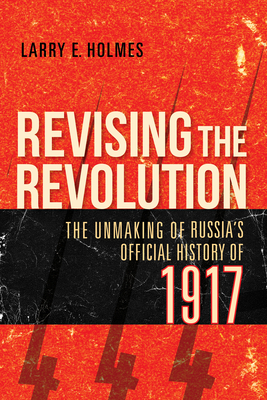 Revising the Revolution: The Unmaking of Russia's Official History of 1917

The clash between scholarship and politics--between truth and propaganda--was ruthless for historians in Istpart, the Russian Communist Central Committee's official historical department.

Istpart was tasked with preserving the documentary record, compiling memoirs, and upholding ideological conformism within the national narrative of the 1917 revolution. In Revising the Revolution, Larry E. Holmes examines the role of Ispart's historians, both in the Moscow office and a regional branch in Viatka, who initially believed they could adhere to the traditional standards of research and simultaneously provide a history useful to the party. However, they quickly realized that the party rejected any version of history that suggested nonideological or nonpolitical sources of truth. By 1928, Istpart had largely abandoned its mission to promote scholarly work on the 1917 revolution and instead advanced the party's master narrative.

Revising the Revolution explores the battle for the Russian national narrative and the ways in which history can be used to centralize power.

Revising the Revolution: The Unmaking of Russia's Official History of 1917

Larry E. Holmes is a professor of history at the University of South Alabama where he has taught since 1968. During the 1992/3 academic year he lectured in Russian and Soviet History at Rostov State University in the Russian Federation.

Holmes has been the recipient of numerous awards including grants from the Kennan Institute, National Endowment for the Humanities, American Council of Teachers of Russian, and the International Research and Exchanges Board. Author of The Kremlin and the Schoolhouse: Reforming Education in Soviet Russia, 1917Ð1931, and Sotsial’naia istoriia Rossii: 1917Ð1941,

Holmes has also published articles in Slavic Review, Russian Review, History of Education Quarterly, and other scholarly forums. He lives in Mobile, AL.